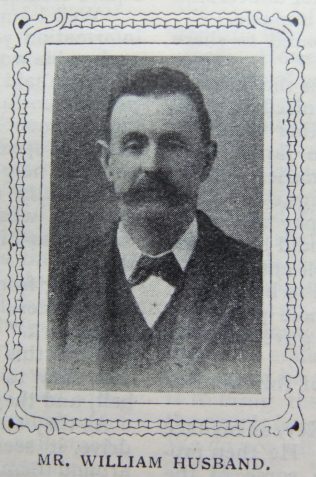 Mr. W. Husband, the esteemed Society Steward of our Aquila Road Church, Jersey, is one of that noble band of workers for God who, by “calm and tempered zeal,” unfaltering devotion, and robust faith, are truly the pillars of the Church of Christ. For twenty years he has filled the office of society steward with the increasing confidence and respect of his brother officials, who rely more and more upon his soundness of judgement and probity of character in all matters relating to the administration of the Church. Thus his path is one of ever-widening influence and usefulness.

He is no publicity or popularity seeker; nor yet is he ambitious for office; his gifts and predilections do not lie in these directions. But see him in the Sunday night prayer meeting – there he is seen in his element. It is a means of grace to hear him plead at the Throne of Grace in behalf of souls, and the sick, and the distressed; and then to announce a hymn for all to join in heartily singing God’s praise. Often has the writer felt that such Sunday evening prayer-meetings have been richer in spiritual power and grace than any other part of the day’s services. All thanks to God that the Primitive Methodist Church has such worthy men enrolled amongst her members and officials, who despite all the stress and strain of modern business life, and the far greater dangers of prosperity and riches, which, alas! Only too frequently, act as deadly anaesthetics to the spiritual nature, yet keep the heart and conscience tender and unstained, and find their chief delight in the material and spiritual prosperity of Zion. Mr. W. Husband is one of these.

God has greatly blessed him in temporal matters. His large and flourishing business provides employment for many workmen.

William was born abt 1861 at St Helier, Jersey, to parents Richard and Elizabeth. Richard was a mason.

William was a builder.