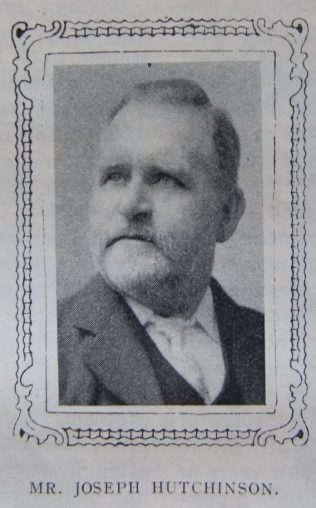 AMONG successful and devoted Class leaders, Mr. Joseph Hutchinson deserves a place, He was born at Sacriston in the year 1852, so that he is getting on for sixty years of age. He is, however, by no means a superannuated worker in the great army of our Class leaders. Sacriston is a Colliery village near Durham and from here, when our brother was three years of age, his parents removed to Perkinsville, which is situated near Ouston in the Chester-le-Street Circuit. His parents were loyal Primitive Methodists, and as there was no chapel at Ouston the services were held for some time in their house. Here he began to attend the Sunday school and has ever since been associated with Sunday schoolwork. He held the office of Sunday school superintendent at Ouston for nine years. Then circumstances necessitated his removal to Pelton, a place about half a mile distant, where he associated himself with our cause, which was very weak. Ever since he has been a pillar in our little church at Pelton. He has sometimes had to face great difficulties, for at one time he was the solitary male member connected with the church. But he never lost heart or hope and toiled faithfully on, with the result that we have now a membership of forty-five.

Immediately on his associating himself with the cause at Pelton, he was made superintendent of the school, an office he has now held for the long period of twenty-one years. In the circumstances we have described it will be recognised that his work as a Class leader would be specially vital; this office he has now held over thirty-three years. May he and his wife and family long be spared to our Zion.

Joseph was born in 1852 to parents John and Jane. John was a coal miner.