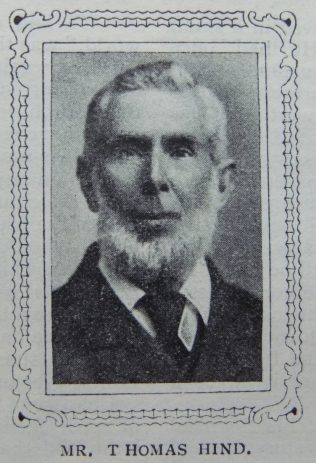 Mr. Thomas Hind was born in 1836, and converted under the ministry of the late Mrs. Rawding, of Retford, when twenty years of age. Thus for fifty years he has been, without a break, a member of our beloved church. For almost fifty years he has been a successful local preacher, and for the last thirty-four years a Class Leader. And in a wide country Circuit like this, where the minister can only visit each society once in three weeks on a week-day, and one Sunday a quarter, the office of Class Leader, if the spiritual welfare of the society is to be kept in a glowing condition, is no sinecure. Bro. Hind is a resident of Bothamsall, a village that in its entirety belongs to the Duke of Newcastle, in which we have never been able to obtain land upon which to erect a chapel. Bro. Hind, although a tenant of the Duke from the first opened his home for preaching, and for the last thirty-four years all the public services, as well as the class-meetings, have been held in his home. At the outset he had to suffer for his sturdy convictions; publicans and parsons boycotted him, and took away their work, but by his consistent demeanour, and sturdy uprightness, he eventually made even his enemies to admire him. During this period as Class Leader, his class has conducted prayer-meetings in many of the cottages in the village. Thus his local ministry has touched and brightened many lives. Although he has lived beyond the psalmist’s allotted span he is still hale and vigorous. In spite of domestic trials his faith is strong, and his face radiant. Our prayer is that his bow may long abide in strength, and that when his days of earthly service come to an end he may have a triumphant entry into the everlasting Kingdom of our Lord and Saviour Jesus Christ.

Thomas was baptised Isaac Thomas Hind on 5 October 1836 at East Markham, Nottinghamshire. Isaac and Martha were his parents. Isaac was a blacksmith.

Thomas worked as a blacksmith.