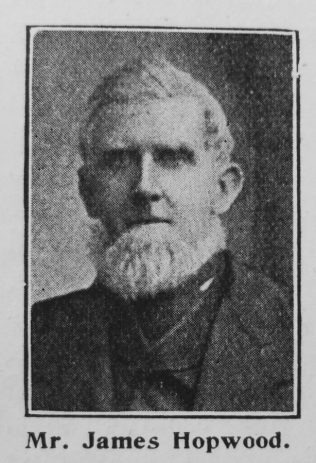 Transcription of Obituary In the Primitive Methodist Magazine by Edwin Dalton

The York 1st Circuit has lost by death one of its oldest, most faithful, most loyal and most enthusiastic officials and friends in the person of James Hopwood. He was one of the trophies won by village Methodism, who in subsequent years took up his residence in the city. He was born in the small village of Sicklinghall, a few miles from Wetherby in the Tadcaster Circuit, on November 25th, 1830. He was converted in the village of Water (Warter) in the Pocklington Circuit when he was 18 years of age. He immediately joined the Church and was warmly interested in all its affairs. One striking characteristic of the man was his carefulness in small matters, indicated by the preservation of all his class tickets during the long term of his membership. His first ticket bears the date of September 1849. In the year 1851, he settled in Fridaythorpe, a small village on the Yorkshire Wolds. He at once joined the society and took an active part in everything that affected its various interests. His first settlement in the York Circuit was near Dunnington, where he identified himself with the small society, and, although he had some distance to walk, was among the most regular attendants at the class meeting and other means of grace.

In 1861 he removed to the city and joined a class conducted by the now sainted Mr. Huggins. Of that class he remained a member for 39 years; 20 of these years he was the honoured, trusted, and beloved leader. He established a successful business in the city, in which he was very careful to enthrone Jesus Christ. No man ever put his conscience and religion into his business more thoroughly than did he. He would have sacrificed everything and sometimes lost much for the maintenance of principle. He was incapable of a mean action, and scorned the suggestion of taking undue advantage. That uprightness of character that made him hate a crooked furrow when he was ploughing made him hate crooked ways in business.

The Church honoured him with very important and responsible offices, and always found the duties faithfully discharged. For many years he was a member of the District Committees and held the office of Treasurer to the District Furnishing Fund Committee. His family have received many letters of sympathy from ministers and laymen in various parts of the Connexion, all bearing testimony to the high esteem in which he was held by those who knew him. The Rev. M. Knowlson says, “I found him straightforward and upright in all his conduct.” The Rev. W.S. Barrett says, “I shall not easily forget his devout spirit, his humble mind, his kind and generous heart, his interest in and devotion for God’s cause.” The District Committee in its resolution says, “We especially admired his modest unassuming spirit, his quiet Christian demeanour, as well as his unswerving loyalty to Jesus Christ, and the interest of our Church.” Rev. A.J. Bull says, “He was a man whom I very highly esteemed for his genuine Christian character and for his strong and helpful attachment to the Church of which he was a reliable and useful member and official.” He was most beloved by those who knew him best. In the later years of his life he was heavily afflicted, but he bore his affliction with exemplary patience. His interest in the Church never slackened. Among the last questions he asked were questions affecting the prosperity of God’s cause at Stonegate. He was allowed to complete his threescore and ten years, and when he was called to cease serving on earth, it was that he might be promoted to the higher service of heaven, where the saints serve the King “day and night in His temple.” We pray that the consolations of God may be the portion and strength of his widow and family.

James was born to parents James, an agricultural labourer, and Hannah.