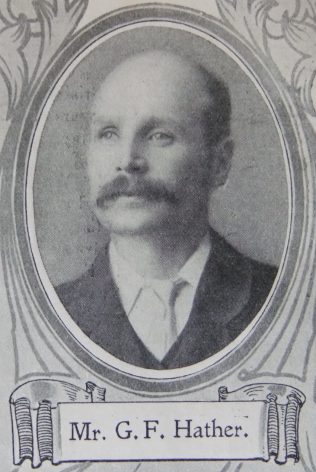 Mr. George F. Hather has been the Circuit Steward of the Doncaster First Station for over eight years. He is a kind and most genial gentleman, and he has won the hearts of his brethren by his kindness and courtesy. A gentleman was asked a few days ago, “What is the principle trait in Brother Hather’s character?” and the reply was, “He delights to serve and oblige.” He has a large family and knows something of the afflictions and sorrows of life. But amid the stress of a large business, and the cares of family life, he has served the Doncaster First Circuit faithfully and well.

When the Circuit was required to toil and self-sacrifice he has given himself to the work most cheerfully; and his brethren praise him for his work’s sake. He is a sound Methodist, and we pray that his life may be long spared to serve the church of his choice.

George was born in 1867 at Haxey, Lincolnshire, to parents George and Mary. George, senior, was a farmer.

George worked as a butcher.

George married Rosa Simpson (abt1866-1937) in the spring of 1888 at Doncaster, Yorkshire. Census returns identify eight of thirteen children.