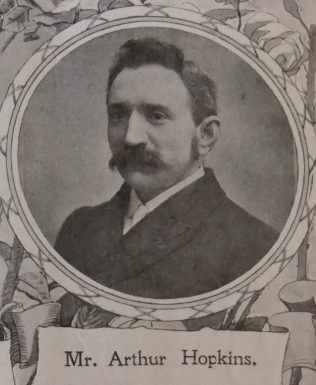 If long family connection with a Church entitles a brother to denominational distinction, Mr. Arthur Hopkins, of Salisbury, has honour indeed. His father is the oldest member of the circuit – his membership dating back to 1842; and his grandfather was a local preacher at the time of the circuit’s formation in 1831. He thus claims to have been related to Primitive Methodism for upwards of three quarters of a century. His own membership extends over a period of thirty-two years, during which he has held various leading positions in our Fisherton Street Society. He is still serving as Sunday School teacher and treasurer and secretary to the trustees, During the past four years he has also been senior circuit steward. In all his offices and efforts Mr. Hopkins is warmly supported by his devoted wife and children. May he long be spared, and his usefulness increase with advancing years!

Arthur was born in 1856 at Salisbury, Wiltshire, to parents George Hopkins and Mary Ann Quinton. George was a cordwainer.

He married Catherine Wellstead (1855-1925) in the summer of 1879 at Blanford, Dorset. Census returns identify seven children.