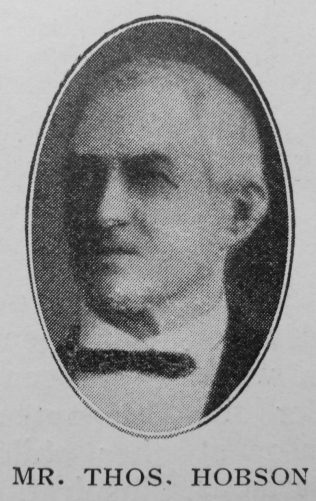 Transcription of obituary published in the Primitive Methodist Magazine by N. Brown

The Keighley West Lane Society sustained a severe loss when, on December 17th, Thomas Hobson heard the home-call. Born at West Morton in 1837, about fifteen years later he came to reside in Keighley, and from that time onward, first in Queen Street, and then in the new Church in West Lane, he was closely and continuously associated with our Church.

A man of quiet demeanour, but of sterling character, in the School, as teacher, secretary, superintendent, for over fifty years; sharing responsibilities and duties as a trustee; regularly attending the services and class meetings; and contributing liberally to the church funds, he in all ways evidenced his regard for his Church.

His character and worth cannot be better set forth than by quoting samples of letters received by his widow from many ministers and friends. Rev. G. Bichon (Bicheno) wrote: “He had nobly borne the burden, and had striven long and faithfully in the fight. West Lane will miss him. Never man stood more faithfully up to his responsibilities than did he in connection with that church.” Rev. T. Markwell wrote: “For thirty-nine years I had known Thomas Hobson. He was a good man. Quiet, unassuming, conscientious, considerate, zealous in the discharge of his duty, by his decease our beloved Church has lost a generous supporter, and an ardent worker and well-wisher.” Rev. J.S. Sunderland, a former scholar and member at old Queen Street, wrote: “He discharged his duties punctually, diligently, and conscientiously. Unaffected piety, devotion to the means of grace, and deep interest in all that made for the well-being of Christ’s kingdom, marked him throughout life.”

Latterly he had failed in health, but his concern for all spiritual things remained firm and full to the last. Sincerely we pray that his sorrowing widow may be divinely sustained.

Thomas was born in late 1837 at West Morton, Bingley, Yorkshire, to parents William Hobson, who worked the land (1841), and Barbara Duckett.