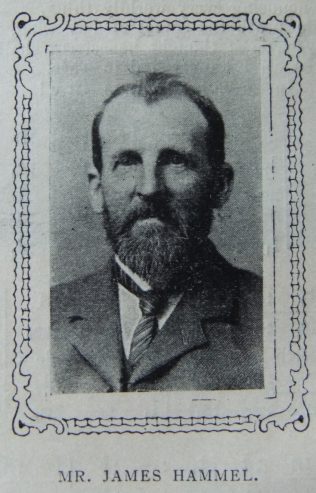 MR. JAMES HAMMEL is a native of the beautiful village of West Burton in far-famed Wensleydale, where he was first a farm servant and then a lead miner. Removing into the county of Durham, he worked in the coal-pits, until, compelled by ill-health to seek other means of subsistence, he commenced a small business, which during the last few years, has developed into a large wholesale establishment.

He was brought into the Church during a great religious awakening at Hunwick, Within six months of his conversion he became a class leader at Roddymoor. For upwards of thirty years he has rendered invaluable service in the pulpit, class meeting and Sunday school, chiefly at Quebec Colliery and Esh Winning, in the Waterhouse station. His class is the largest in the Circuit, and out of it have sprung three more. Its prosperity is in no small measure accounted for by his intense social feeling, vital faith, penetrating sympathy, generous recognition of gifts of leadership in others, and steady refusal to allow anything to interfere with his attendance.

He is a member of the District Committee, and Treasurer of the Circuit Centenary Fund. His seven children are members of the Church, and two of them are local preachers. He is popular with other churches, and often presides at their public gatherings. His transparent sincerity and instinctive generosity have inspired true affection for him in the hearts of a multitude of friends. This was very evident when a short time ago he underwent a serious operation. He attributes his remarkable recovery to the prayer of his own people at Esh Winning.

The whole life-force of his nature in now devoted to the service of God and the moral welfare of his fellow-men.

James was baptised on 29 August 1852 at Aysgarth, Yorkshire. He was born at West Burton, Yorkshire, to parents John and Dorothy. John was a labourer.

On leaving coal mining, James developed his business as a general dealer.