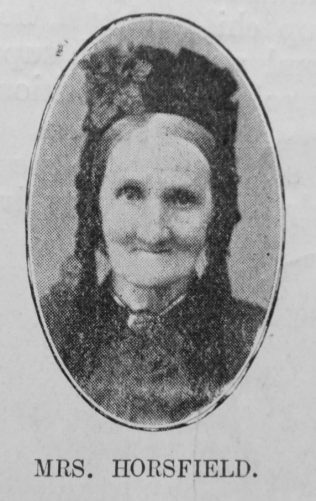 Transcription of Obituary published in the Primitive Methodist Magazine by J.T.

MRS. HORSFIELD, of Lund, in the Driffield Circuit, passed to her home in Heaven, May 21st, 1909, She was born at Elton, another village within the bounds of this great circuit, on May 20th, 1818. During seventy-five of the ninety-one years of her life she was a member of the Primitive Methodist Church. Written on the back of her trial ticket given to her in May, 1834, are these words, “Found peace with God the 27th of April, 1834.”

The Rev. F. Rudd says:—“I knew her somewhat intimately over sixty years, and never knew her to act in a manner unbecoming a Christian. She was a devoted wife, a loving mother, and a faithful friend. Her uniform kindness and Christian sympathy won the esteem of all who knew her; her loyalty to her church gained the confidence of all Primitive Methodists with whom she was associated; and her catholicity of spirit elicited the admiration of members of other churches.”

After David’s death, Ann worked as a grocer.