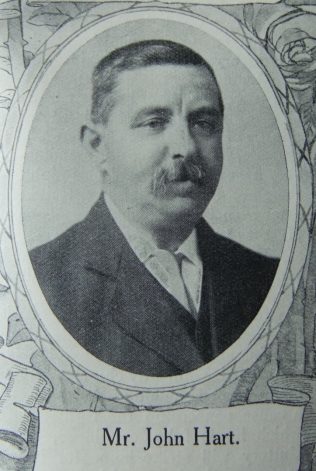 Mr. John Hart has been Steward of the Halifax 1st Circuit for eleven years. He is associated with “Ebenezer” Church, and is in touch with all its Institutions. He has been a Class leader for twenty years, a Sunday School worker for twenty-seven years, a teacher of the young men’s class for twenty-two years.

He has ministered unto his own people (and those of other Churches), as a Local Preacher for twenty-eight years, and is as acceptable to-day as ever. He serves his District as Secretary for the Local preachers’ Training Committee. He is a product of our own Church, and is beloved by his brethren. In Business meetings he is a safe man, thinks before he speaks. As Steward he watches the interests of the Circuit with care; and is kind, thoughtful, and generous, to the Ministry. We wish him long life and service.

John was born abt 1862 at Halifax, Yorkshire, to parents William and Martha. William was a carpet weaver.