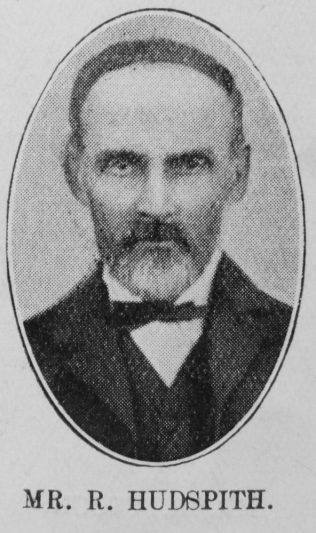 Transcription of Obituary published in the Primitive Methodist Magazine by T.P.E.

Sorrow gripped the hearts of the members of the Haltwhistle Circuit on March 6th, 1909, when it became known that Robert Hudspith had “entered into rest.” For over five years he had been unable to follow his employment, owing to a heart trouble. During this long period he was ever bright and cheerful. He never complained, never grumbled. It was God’s will and therefore it was all right. It was always a pleasure to meet our friend; you always came away feeling you had got more than you gave. He was not a rich man by any means, but his gifts to his church were always upon a generous scale. Part of his income was never regarded as his; it was his Master’s.

He was converted about forty-two years ago during the ministry of the late Rev. James Jackson, in this Circuit. Since that time he has been one of the best workers in our Haltwhistle Church. As Sunday School superintendent he was in his element. He loved the bairns; yes, and they loved him. He always had a smile and a cheery word for them wherever he met them.

By his fellow townsmen he was highly respected. Proof of this was seen in the large congregation which attended the funeral service conducted by the writer. All sects and all classes were represented. It was a wonderful tribute of respect. For sixty-six years our brother had lived in this town—the place of his birth and death. He was a strong man; a man who lived near to God, and his departure makes a gap in our ranks which it will be difficult to fill. He lived a useful life and his example will be an inspiration to all who knew him. We tenderly laid his dust to rest on Sunday, March 9th, and as we wended our way home we felt that earth was the poorer through the death of Robert Hudspith.

The prayers and sympathy of the Church are with the widow and family, all of whom are members of the Church our friend loved so much and served so well.

“Servant of God, well done!
Rest from thy loved employ;
The battle fought, the victory won,
Enter thy Master’s joy.”

Robert was born abt 1843 at Haltwhistle, Northumberland, to parents Edward, a rail labourer and farmer (1851), and Elizabeth.

Robert earned his living as a coal miner.

He married Elizabeth Lee (1860-1918) in the summer of 1881 in Newcastle upon Tyne, Northumberland. Census returns identify nine of ten children.