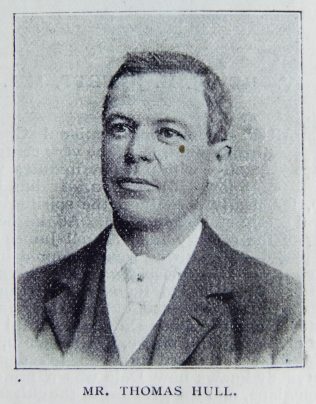 Transcription of Sketch in the Christian Messenger in the series ‘Local preachers Worth Knowing’ by J.S. Nightingale

SHOTLEY Bridge Circuit, amongst others, could, if necessary, furnish a list of names of good men and true, who, as local preachers, are well worth knowing. Not the least worthy is the subject of this brief sketch, Brother Thomas Hull, of Consett. If loyalty to Primitive Methodism, diligence in duty, consistency of character, and generous sympathies, distinguish such men, then our friend deserves a place in the album of honoured ones. He has spent nearly the whole of his life in Consett, and for over thirty years has been actively associated with us.

It will be no exaggeration to say that he had a very poor start in life, and as far as educational advantages were concerned, almost none. Sent to work at a very tender age, and before he could scarcely read or write, and with not much to encourage or lead to a life of godliness, his lot was not a promising one. But the path was to open out in God’s own way, and at length, under the ministry of the Rev. Thomas Southron, he was led to decision of character, and very soon afterwards called to public work in the church and circuit. When converted he could not read, and even after his name appeared on the plan, only a little. With a persistence and tenacity, however, which have been characteristic of him ever since, he mastered the difficulty, became a diligent student of the Bible and theology, and soon became an acceptable local preacher. Blessed with a splendid voice, he has rendered good service as an open-air speaker. At a camp meeting he is heard to advantage, and never seems to weary from the beginning to the end of the day, exhorting, praying, and in every possible way throwing all his energies into the work of leading men to the better life.

He is a fine example of loyalty to his own Church. There is no member or official in the circuit who purchases more of the literature of the Book Room than our friend. He has a supreme contempt for the Primitive Methodist who finds a place weekly for the ‘Christian Herald ’ and no place for our magazines. He believes he belongs to the best Church in the world, with all her deficiencies, and it would be difficult to find a Primitive Methodist who is prepared to set forth the sincerity of such a conviction more loyally than himself, according to his time, means, and ability. His absence from Consett church makes no difference to the collection, for it has long been a custom with him, that when from home, his offerings have been placed in the hand of his life-long friend, Brother George Lowes, society steward, to lay on the plate. No appeal is made to him in vain on behalf of the finances of the church, and in all efforts you can rely upon our brother to be one of the first to come forward to render assistance.

In addition to being a local preacher, Mr. Hull has also been a class leader and trustee for many years, and until he felt the burden too great was also a teacher in the Sabbath School. Our church at Consett is to our brother the apple of his eye. When everything is prospering in the society he has no greater joy, and frequently in quarterly meetings his brethren indulge in good-humoured chaff in relation to his attachment to his own place. He has never sought reward for his work, and might have more frequently represented his circuit at the District Meeting than he has done, had he so wished. But he occupies an honoured place amongst us, and without being perfect, we could wish and pray that all our circuits might be blessed with men so loyal to Christ and the Church. For a number of years he has occupied an official position under the Consett Iron Company, which, with all its responsibility, is a tribute as to the place of respect he holds in the eyes of his employers. That he may be spared many years yet to carry on the good work in which he is engaged amongst us, is the prayer and earnest wish of his many friends who esteem him as a man, a Christian worker, and a thorough-going Primitive Methodist