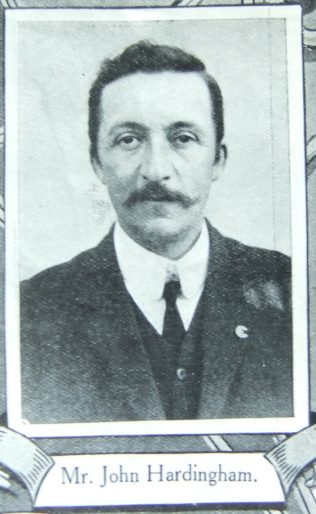 Mr. John Hardingham has occupied the position of Senior Steward of the North Walsham Circuit for several years. As an official, he is far-seeing, very energetic, and always ready to advocate such reforms as are necessary. The interests of twenty-six societies are many and varied. Such responsibilities might alarm some men, but he is equal to the task.

He is in great demand as a local preacher and has few free Sundays. Besides, he is an active Christian Endeavourer and an enthusiastic Sunday School worker. For some years he has occupied the position of Superintendent of the Dilham Sunday School, a school of which any village might be proud. He has taken great interest in Connexional affairs, and has been particularly earnest in his discharge of the duties of Treasurer of the Circuit Centenary Fund. He is a loyal Free Churchman and a prominent worker in connection with the local Free Church Council.

John began work on the land but after marriage census returns give his occupation as a grocer.

John died in early 1955 within the North Walsham Registration District.