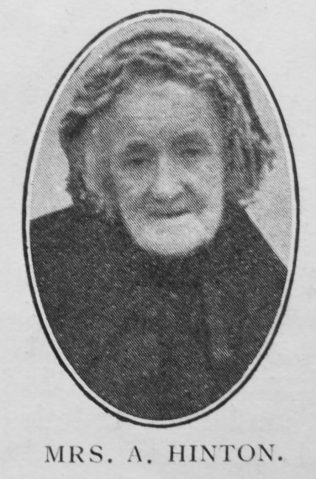 Ann Hinton was born at Cleeton St. Mary, Salop, October 7th, 1827, and died at Hopton Bank, December 20th, 1908. At an early age she was converted in the old chapel at Hopton Bank, and became one of its most consistent members. Married, in 1864, to James Hinton, local preacher, trustee, and Sunday School teacher, together they worked hand in hand for the Church.

For many years she was our chapel keeper, receiving a salary of £3 a year, which was returned to the trustees. A familiar figure at tea meetings, in various ways she contributed to the welfare of the Church. For many years her home was open for the preachers. A devout student of the Scriptures, sought to carry out its teachings by a consistent life. The writer well remembers the encouraging words she gave on his first attempts to preach. Her life was hid with Christ in God. She could say with truthfulness, “For to me to live is Christ and to die is gain.”

We buried her in the chapel yard by the side of her husband, the funeral rites being performed by Rev. T. Clamp; and as we sang beside her grave “For ever with the Lord,” we felt assured that she was gone to an inheritance which is incorruptible, undefiled, and that fadeth not away.

Ann was born on 7 October 1824 at Cleeton St Mary, Shropshire, to parents Edward Dolphin, who worked the land (1841), and Abigail Broome. She was baptised on 21 October 1827 at Farlow, Shropshire.