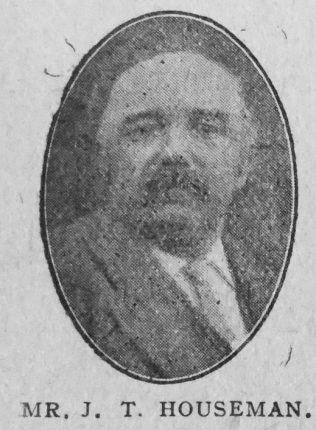 SELBY Circuit has suffered a very serious loss by the sudden passing of Mr. J.T. Houseman. Brought in early life under the influence of our church, he has been a loyal, consistent, and energetic worker for nearly forty years. His association with the Sunday School has never ceased, as scholar, teacher, secretary, and superintendent.

When seventeen years of age, he began to preach. His shrewd, pithy, and earnest sermons were very acceptable. He missed only two appointments, once because he was ill, and once because of a severe storm which made the roads impassable. His services were in request on special occasions. At harvest festivals he will be missed, not only as a speaker, but especially for the humorous and spirited selling of the goods brought as offerings.

He was for over twenty years Treasurer and Secretary for the horse-hire fund. He was Chapel Steward for many years, and a Trustee for Selby Chapel, and several other chapels in the circuit.

On several occasions he was delegate to District Synods, and was elected to the Nottingham Conference.

Wherever he was he was full of sunshine and hope; difficulties to him were incentives to greater effort.

He was Chairman of the Barlby Parish Council, and a member of the Riccal Rural Council Advisory Committee. In his fifty-third year he was suddenly stricken while at work in his warehouse, and after lingering three days, passed away without fully regaining consciousness. All was done that could be done to save a life so valued, but at eleven o’clock on Sunday morning, November 15th, 1917, he left the church below for the church above.

The Town of Selby showed appreciation of a genuine character by many floral tributes, and attendance at the last rite. Members from all parts of the Selby Circuit assembled to bid farewell to a brother beloved. The former part of the burial service was conducted by the Circuit Ministers, Revs. F. Winterburn, P. Myers, and J. N. Clague, a former minister.

He leaves a widow and five daughters. He was a loving husband, and an ideal father, and their home feels now empty indeed without him.

John was born abt 1865 at Leeds, Yorkshire, to parents George and Matilda. George was a coach body builder and died when John was very young.