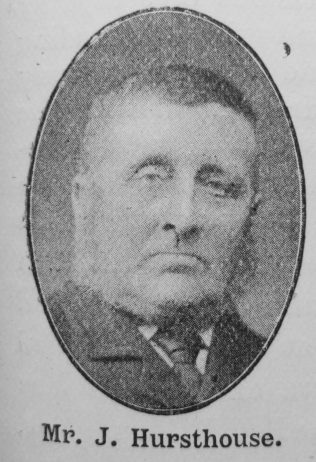 Transcription of Obituary in the Primitive Methodist Magazine by J.H. Hemshall

Mr. Joseph Hursthouse of the Mansfield Circuit, finished his earthly course May 12th, 1901, in his 76th year at Sibshelf. He was born at Old Redford, Nottingham. His father was a local preacher, who travelled many miles in the work that his son after him took up and so long carried on. Joseph was converted when about 13 years old. Early, also, did he enter the work of preaching the the gospel, so that he was enabled to complete 50 years as a local preacher. From the beginning of his Christian life it is stated that he was a willing and earnest Christian worker, and from the time he was heard to pray by the side of his good mother’s coffin, thanking God for her saintly life, he never looked back. Even and steady in service his kindly spirit and unfailing consistency helped him to recommend religion to both young and old as the very life of a virtuous character. Our departed brother was raised up in days when unfaltering faith, unflagging zeal, simple speech, and strong lungs were essential qualifications to success in the work of our church. And well did he labour, and long. He was one of the less known toilers to whose services our Connexion owes much.

His acquaintance with Bourne and Clowes he often quoted to us, and was often affectionately speaking of other labourers who had gone before. His character was humble, but genuine and pure. Undemonstratively, but sincerely and perseveringly, he served his Church to the end of life here. Freely did he use his abilities and his means in the Master’s service, making others to feel that he ever found it more blessed to give than to receive. In the support of his society, circuit, and especially the missionary cause, he was ever found doing what he could.

When advancing years and increasing infirmities prevented him from travelling to circuit appointments, he went on with his beloved work of Sabbath-school teaching and class leading, being a superintendent and leader for many years.

In pulpit, school, class or prayer meeting wherever we heard him we felt that he was a good man. He was not aside for a long time, though often afflicted, but after numerous exhausting attacks upon an exhausted nature, the weary wheels of life suddenly stood still. Many came to his funeral and the service that followed who, while mourning the end of a life of practical godliness felt compelled to thank God for the grace that enabled him to serve so well and so long in the Master’s vineyard. He died in the church of his early choice, he loved her services, honoured her claims, rejoiced in her prosperity, and was esteemed highly in love all around this large circuit for his works’ sake.

Joseph was born to parents Samuel, a labourer, and Ann.