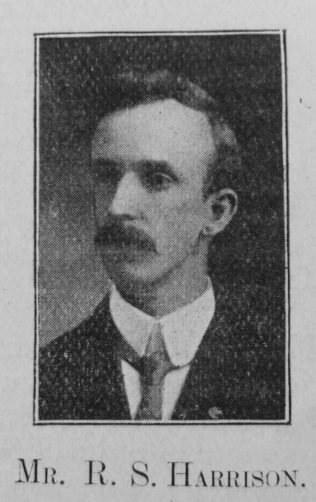 Transcription of Obituary in the Primitive Methodist Magazine by Thomas Harrison

“In the midst of life we are in death,” was borne to our minds as probably never before, on Sunday morning,” October 18th, 1903, when the sad and unexpected intelligence reached us that our dear brother Robert Sinclair (Bob), the second son of John and Elizabeth. A. Harrison, without a moment’s warning had quietly and peacefully passed into the unknown at the early age of thirty-two. It was to us all, however, a source of unspeakable comfort to know that he was so fully prepared for the sudden translation. His early life was quite uneventful, the earlier years being spent at West Pelton in the county of Durham, where he was born on September 6th, 1871, and yet he soon gave promise of a singularly successful life. At Bearpark in the same county he passed through the usual training for the position of a schoolmaster, but ultimately he abandoned the teaching profession, and on his parents removal to Newcastle-upon-Tyne he became a clerk in the counting house of Messrs. Bainbridge and Co. During this period at the age of twenty he became associated with the Wesley Hall, Elswick, and was connected with several of the movements there, such as the Boys’ Brigade, of which he was Captain, and the Epworth League. Unfortunately, however, he strayed from the fold, and it was not until his removal to Gateshead some two or three years later, that, at special services conducted by the Rev. W. Reed, in our Sunderland Road Church, one Sunday evening, he re-dedicated himself to the Lord Jesus Christ. One who was there writes saying: “The night still lives in one’s memory – his bold going-out for the Master, and then in triumphant notes, his fine tenor voice striking up ‘My God is reconciled.’ ” No conversion was ever more real or complete, the change effected being most pronounced. Thence forward his whole energies were thrown into the work. He associated himself with the Sunday School of this Church, the Christian Endeavour Society, the Sons of Temperance, and subsequently came upon the plan as a local preacher. But while ever faithful to his other duties, no work appealed to him quite so much as that of the Christian Endeavour. In due course he became President of the Christian Endeavour Society, and during his presidency, he had the joy of seeing the membership so increased that it was found expedient to have a meeting room to themselves. The result was that Mr. W. Carr, a true friend to all aggressive work in the church, took up the project, and the first Christian Endeavour Hall in Primitive Methodism, if not also in this country, was built.

The coming of the Christian Endeavour National Convention to Newcastle was to him a great joy, and found for him his great opportunity. He was appointed to the distinguished position of Assistant to the General Secretary of the Convention (Mr. Fletcher) and gave himself unreservedly to the work. As several of his Colleagues have said: “much of the success of the Convention was due to his energy, tact, and business capacity,” and so ardently did he throw himself into his duties that the result was indifferent health. His work was loyally done. The Convention was his monument; it just appeared as if it were the consummation of his life’s work – his labours ended there. A few months after he was married, and but two short months of married life were allotted to him, when he suddenly passed away. On the Saturday, which was the day preceding his death, he had some friends in to tea, and in his usual cheery way sang his favourite hymns, “Take time to be holy,” and “Jesus, Saviour, pilot me,” little dreaming that the Saviour was so soon to pilot him across the river of death. The following morning he awoke and dressed, and not feeling well, was preparing to go to his fathers to ask him to get someone to take an appointment for him that day at Eighton Banks, as he felt unable to take it; just before proceeding to put on his hat, without uttering a, sound, he sank into a chair and immediately expired.

On the Wednesday following some hundreds joined in following his remains to the grave. A service was held in the Sunderland Road Church of a very impressive character, conducted by Rev. G. Armstrong, Superintendent Minister, an effective and appropriate address being delivered by Rev. W Duffield, of the Jarrow Circuit; the Revs H. Pratt, E.R. Davies, and W. Barton, also took part in the service. The large number of wreaths sent by both private friends and public bodies, bore ample testimony to the love and esteem he had gained by his unselfish, Christly life. So on that bright October afternoon, as we stood by his open grave, though with eyes blinded by tears, there came to us unspeakable comfort from the words of the Master, “I am the Resurrection and the life; he that believeth on Me, though he were dead yet shall he live, and whosoever liveth and believeth on Me shall never die.”

Robert married Mary Ann Simon or Jane Wales in the summer of 1903 at Gateshead, Co. Durham.