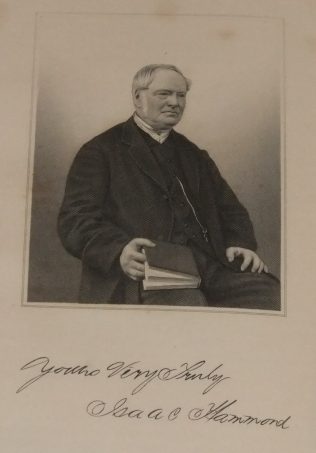 Isaac was born in December 1799 at Cheadle, Staffordshire to parents Ralph Hammond and Alice Grubb. He was baptised on 26 January 1800 at St Werburgh, Kingsley, Staffordshire.

Isaac was apprenticed in the boot and shoe trade and became the leader of a group of young men who were the terror of the town. Isaac attended a PM prayer meeting in a cottage, intending to cause disruption, but found himself moved and converted through the experience.

Isaac was soon on the preachers plan. Isaac’s second wife, Ann Jackson of Oswestry was a travelling preacher on the Ramsor circuit. She was known as “the weeping prophetess”. Together they exercised a joint ministry including holding open-air services. Following one such service on Kingsley Green a new class was formed that included two future ministers (G Austin and J Harvey) and two future prominent laymen (T Cooper and T Austin).

Isaac often represented the Ramsor and Longton circuits at the District Meeting. He became a Deed Poll member of Conference in 1864.