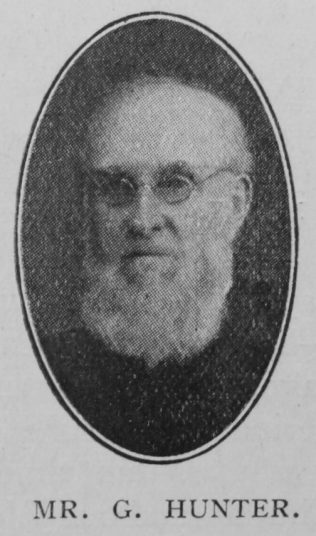 Transcription of obituary published in the Primitive Methodist Magazine by W.T.C.

By the death of Mr. George Hunter on April 22nd, 1912, at the age of eighty-one years, the Church at Withernsea lost one of its founders, and the Patrington Circuit an esteemed official. Converted in early manhood, he always retained the early Methodist type of character—sincere, fervent, deeply spiritual, demonstrative. Nearly sixty years ago he came to Withernsea, and at once threw in his lot with the infant society. Of our first chapel in the growing village he was a diligent promoter and trustee. When a Sunday School was commenced he was one of the workers. Presiding at the meeting which celebrated its jubilee last year, he narrated an interesting account of the circumstances attending its origin. He was a local preacher through a long term of years, regularly taking his appointments almost until the end. Chapel building schemes always found in him a liberal supporter. The means of grace were his great delight.

The last few months of his life were seasons of great suffering, in which he found sustenance in the grace of the ever-present God. He was interred in the Withernsea Cemetery on April 25th, amid many tokens of appreciation, the Circuit ministers officiating.

George was born abt1831 at Cottingham, Yorkshire.