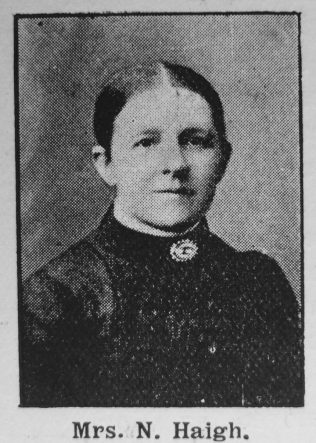 Transcription of Obituary in the Primitive Methodist Magazine by John Gair

The study of the life of this devoted woman of God turns our minds, almost instinctively, to a subject well-nigh exhaustless; the holy women of Methodism, and of our own church in particular. As they pass before us in the written record, as we knew them in life, what scenes do they recall, what beauty of character, what usefulness of life, what heroic endurance amidst poverty and affliction, what achievements for Christ and His Church, what splendid deaths! In the early years of our Church’s History, our holy women sustained our prayer and band meetings, and were the main support of our out-door services. They attended and were not afraid to testify for Christ in the class meetings, and their presence and responses in our public worship were an inspiration to many a minister. Our old minutes of Conference and plans show that they entered the full ranks of the ministry, and many a town and village have they missioned for Christ.

But our Church can boast another class of women, wives of ministers who, though not so well-known, have rendered equal service in a quiet way, and amongst the latter was our departed friend Mrs. Haigh. She was born at York on December 14th, 1846. Her parents were Wesleyans, and in their devoted home she was trained in the fear of God. When nine years of age she sustained the greatest loss a girl can sustain, in the death of her mother, but the loss was over-ruled by our Heavenly Father in bringing Jennie to the knowledge of the truth as it is in Jesus, and from that time she rejoiced in the consciousness of peace with God through our Lord Jesus Christ. After the death of her mother she spent much of her time with her aunts, Curtis and Jaques, sisters of her mother, and they became deeply and mutually attached.

Rev. Nathan Haigh entered Elmfield College in the year 1867, as a student for our ministry, under the able tutorship and beautiful example of Rev. John Petty, the first Governor, from whom he received a dying benediction, after watching at the death-bed of that holy man. It was during this memorable year that Mr. Haigh became acquainted with his future wife. No engagement was made at that time, but the acquaintance ripened into a mutual affection which led to their union at York on November 2nd, 1872. Then began a life of usefulness which only ended in death. Their first station was Maidstone, and here, on the anniversary of their wedding this first child was born. They named her Amelia Jaques, but we always knew her as Lilly, the beautiful flower sent to gladden and adorn their home for many years before the Master gathered her to Heaven. At Maidstone also began Mr. Haigh’s serious illness, brought on by overwork in the open-air preaching on Edinburgh Mission. It was during this protracted illness that all these fine womanly qualities of his wife were brought out. She was a skillful and patient nurse, and I doubt not it was owing to her splendid nursing that Mr. Haigh’s ultimate recovery and useful life under God are due. At Cheltenham they travelled one year, and though the stay was short, useful work was done. Their next sphere was Chesterfield, where I became acquainted with Mrs. Haigh, and during that time I learned to regard her with sincere respect and affection; and in Mr. Haigh I found a most devoted colleague. Mrs Haigh never preached, and seldom was her voice heard in public, or for that matter in the private means of grace, but her influence was of the most powerful and beautiful kind. She answered Peter’s ideal of womanhood; her adorning was the ornament of a meek and quiet spirit, which is in the light of God of great price. In a surprising and indescribable manner she influenced all who came into contact with her, old and young. Her regular attendance at the means of grace, her kindly enquiry after the people, her visiting of the sick and poor, her unaffected benevolence, her generous hospitality, coupled with her true womanly grace and Christian spirit, endeared her to all who knew her. Three years of useful and happy Christian work were spent at Derby First. Then Mr. Haigh was my colleague again, this time at Leicester First. The work to be done at Leicester was great and arduous, but I found in Mr. and Mrs. Haigh true helpfulness. Here their second child was born. Dear little Willie only lived some seven years the sunshine of the home, his father’s joy, his mother’s darling. His Heavenly Father took him in 1889 while stationed at Gravesend. This seemed the beginning of sorrow. The following year she lost her father, to whom she was tenderly attached, and soon after the two devoted aunts. But the crowning bereavement came in 1895, when living at Bournemouth, her daughter Lilly was taken away by the hand of death. No one can ever estimate what this meant to Mrs. Haigh’s motherly heart. By this time Lilly had developed into a fine spirited Christian young lady, with sense and weight beyond her years. She had become the friend, companion confident and adviser of her mother. Her death seemed for a time to almost paralyse Mrs. Haigh, and only time and faith in God could modify such a blow. For nearly ten years Mrs. Haigh never opened her mouth in song, but about two years ago on one bright Sunday mornings service she joined in the Service of Song once more, to her husband’s unspeakable joy.

At each place where they travelled Mrs. Haigh made a host of friends, and at no place more that at Fleetwood, their last station. She lived for others, but specially for young girls in the locality, of any Church or no Church, who were from home and needed a friend.

The end came suddenly, though not unexpectedly. Mrs. Haigh had been ailing for some time, but hopes were entertained that she would recover and spend many years of usefulness. But the Master willed otherwise, and on Sunday, February 23rd, 1902, she entered into the rest of Heaven. The;-following Thursday, at the early hour of five in the morning, the friends assembled at the minister’s house at Fleetwood, where a service was conducted by Rev. T.M. Dickenson (Wesleyan). Outside in the moonlight a large congregation had assembled, and they sang “Rock of Ages” as twelve of our working men bore the coffin to the railway station, from whence it was taken to Gravesend, to be placed in the grave where lie buried her two children.

Rev. Joseph Johnson (London) preached the funeral sermon, and said, “if ever a woman had hold of God’s hand, possessed God’s Spirit and was led and directed by Him, their dear departed friend was that woman. His wife used to say respecting Mrs. Haigh, ‘That woman never comes to see me, but she always brings sympathy, affection and help such as I can scarcely get from anyone else.‘ “

Mr. Haigh has received over 200 letters of condolence from all parts of the country, bearing universal testimony to her sincerity and affection, to the spotlessness of her character, and to her devotion to Christ. We have only room for one extract from the letter of Mr. J.E. Dickensen, who says, “Those old Chesterfield days! they come up before me so vividly. . . . I had a great liking for Mrs. Haigh; it used to be a great pleasure to me to partake of her cheery hospitality. I most sincerely respected and admired her, and regarded her as a friend.”

Jane worked as a hosiery assistant before her marriage.