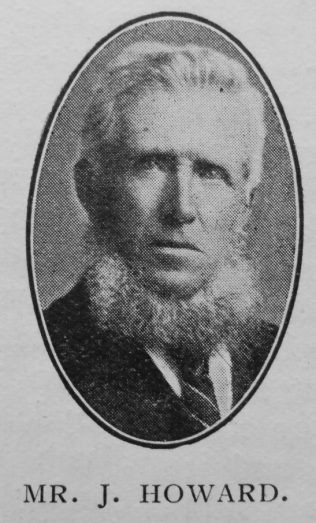 Transcription of obituary published in the Primitive Methodist Magazine by Jas. Cooper

Another link which connected the present with the past was broken by the death of John Howard, of Stotfold Church, in the Baldock Circuit, now called Hitchin. He was one of the noble type of men who have done so much to make our Church the power it is to-day. For fifty-five years he was a faithful and loyal member and diligent worker, and was a local preacher for fifty-four years.

He faced difficulties and overcame; he was trusted and followed because he was known to be a safe leader. His strength was revealed in his reliableness, his constancy, his sturdy loyalty in the darkest and most trying experience of the cause. There was no parade of religious life, and no one ever questioned the sincerity of his faith in, or love for, Jesus Christ. His transparent character testified that he walked with God. His nature was full of kindness. So rich an asset had he been to the Church that when he was carried to his final resting-place in Stotfold Cemetery on January 3rd a very large assembly gathered together both in the chapel and at the graveside.

The burial service was conducted by the minister of the Circuits, Rev. J. Cooper. Many lives have been enriched by the deceased. On Sunday evening, January 16th, Rev. J. Cooper preached a memorial sermon to a large congregation in  Stotfold Church.

John was born on 11 November 1836 at Stotfold, Bedfordshire, to parents John, who worked the land, and Mary. He was baptised on 1 December 1837 in the Biggleswade Wesleyan Methodist Circuit.

John earned his living as a farm labourer.