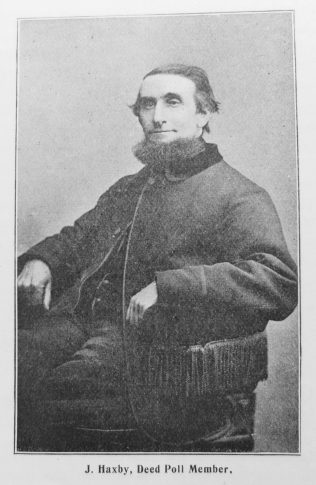 Transcription of Sketch in the Primitive Methodist Magazine by Robert Harrison

In some way not always to be explained, Church life and work are largely determined for many years by the person or persons who under God have the honour of beginning the cause in the town or village. Primitive Methodism is very much what it is in Filey through the prayers and faith of “Praying Johnny.” Those who have thought much respecting the history, methods, and spirit of our Church in Filey, see to what extent he has been and is reflected and reproduced. It has always been marked with Christian simplicity, strong faith, and direct earnest prayer. It would be under the mark rather than over to say that as many souls have been saved in the class-meetings as after the preaching services. There has always been a strange social element in the Church life of Filey and a marked domesticity in its devotions.

If anyone wishes to find a successor to Praying Johnny in spirit, singleness of aim, directness of purpose, and simplicity of method, he certainly would first think of Jenkinson Haxby, the subject of this paper.

As a boy he was noted as quiet and thoughtful – manifesting betimes great concern about spiritual things. Early he was drawn to Christ, and blessedly converted at the age of twelve years. He forthwith began to exercise in public – which was the foregleam of the work in which he has had a life long delight. He joined John Wyville’s class. This Wyville, when a boy, met John Oxtoby, who put his hand on young Wyville’s head and said, “Now, my lad, you ought to be converted. The Lord has a great work for you to do.” This so impressed the lad that it led him to decide for Christ. This was the beginning of a remarkably useful life. His name is lovingly cherished by those who knew him. Young Haxby joined Wyville’s class.

Following Andrew’s example (John i., 41) our friend began his Church Work at home. He had the gladness of seeing all the members of his family (including his father and mother), except one, saved and members of the Church. He became leader of a class in his own house in the very yard where he was born.

The incidents of Mr. Haxby’s life are many, and illustrate the method and spirit of his work. Before his mother’s conversion she was ill and asked him to pray with her. Expressing a wish to bring someone to see her and pray for her, she said to him, “Jenkinson, you can pray for other people and you must pray for me.” This he did, and she was saved. His father was a strictly moral man and honestly believed there was no need for more than the integrity for which he was known. One day his son said plainly to him, “Father, are you fit for heaven?” He answered, “I think I am.” “Well,” said the son, “suppose you die before morning, will you go to heaven?” The son giving his own, experience said, “If I were to die just now, I should go right to heaven. What is it that makes the difference between you and me? I have been to the foot of the Cross and have trusted in Jesus, been made free from sin, been renewed, and have my fruit unto holiness and the end everlasting life.” Such preaching was irresistible. The father at sixty years of age got saved.

Mr. Haxby has done his work for God along this line, illustrating the truth by the relation of his own experience of its regenerating and sanctifying power. He has won many to Christ and the Church thereby. In no studied way he has gained the attention and the heart of many. On one occasion he asked a man named John Williamson to go with him to class. He went and declared he wanted to be saved. He knelt down and was converted. For seven years he lived a good life, and was drowned. While sinking into the sea the fishermen heard him saying, “Cover my defenceless head with the shadow of thy wing.” There lived in the place a man who was very wicked and a terror to the people. Robert Simpson was a man feared in Filey. Mr. Haxby became friendly with him. One day he asked this wicked man to go to class with him. Wisdom is justified of her children in many ways. In a week Robert Simpson went to the class. The news soon spread through the town that he had gone to the meeting, and the house was full. While singing “And there have I as vile as he washed all my sins away,” Simpson found salvation. He lived a happy, useful life, and became Mr. Haxby’s assistant leader. People of other churches have had all confidence in our friend s sincerity, faith, and prayers, The sexton of the Episcopalian Church was very ill, and sent for him to pray for him. He said, “I have dug 1,600 graves. I have partaken of the holy sacrament for thirteen years, but I am not fit for heaven.” Eventually he was led into the light and found peace, and died happy in the Lord.

These incidents show in what way he has lived his life and done his work. It has been a somewhat even life. Perhaps the word plod would best characterise him. For he has visited the people as none else, whether preacher or layman, has done. His delight is specially to visit the poor and help them – the sick, and comfort them. He is loved best by those who know him most. A Church lady was heard to say a short while ago – “Jenkinson Haxby is the best man in the town.” This is high praise, but we believe just.

For a good number of years Mr. Haxby has been the leader of the widely known band of workers called “The Filey Fishermen.” Their sphere of service has been wide, and wherever they have gone their simple hearty singing and brief and spiritual addresses have charmed the large audiences which always come together. The Brothers Haxby have for many years been the stay and soul of the Filey Church. Matthew – good, kindly and devout – has recently gone to heaven; Jenkinson is still with us – useful in many ways to the Church of which he has been a member so long.

At the last Conference he was honoured by being made a member of the Deed Poll. By his unobtrusive, gentle, true Christian deportment he will grace the position. We wish for him many more years of life to enjoy the privilege of being a permanent member of our Annual Conference. Hull District rejoices in his exaltation and honours him for what he has done and is doing for its extension and success.

Jenkinson worked as a fisherman. He married Sophia Rowntree (abt1833-1921) in the spring of 1853 at Filey, Yorkshire.