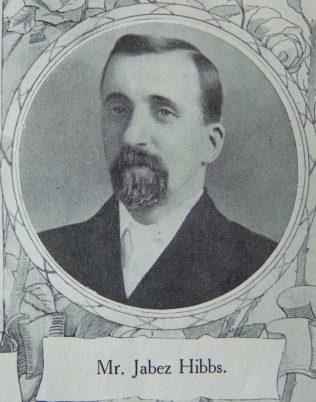 Jabez Hibbs, the highly esteemed Steward of Manchester IX. Circuit, was born at Bradwell, Derbyshire. He is the son of a local preacher, and grandson of a pioneer official of Bradwell Society, also a near relative of the Rev. Jos. Hibbs, who did splendid pioneer work for our Church in South Wales and the West of England.

Removing to Hayfield in 1866, the family joined our feeble cause in “Cote Lane Upper Room,” and assisted in the movement which culminated in the erection of a chapel in 1874. About this time Mr. Hibbs became a teacher and local preacher, taking services with Mark Ingham, then a noted official in New Mills Circuit. For twenty-two years, Mr Hibbs, his wife and family have been loyal members of our Higher Openshaw Church. He is teacher of a men’s class, trustee of several chapels, an acceptable preacher, and the genial steward of the Circuit since soon after its formation in 1892.

Jabez was born in 1854 at Bradwell, Derbyshire, to parents James and Hannah. James was a lead miner.

Jabez married Mary Bradley (1854-1926) in the spring of 1876 in the Hayfield Registration District. Census returns identify eight of nine children.