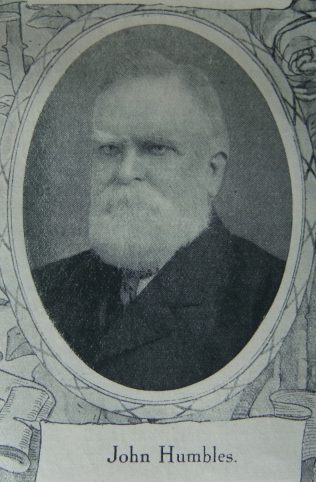 Mr. John Humbles hails from the county of John Bunyan and was converted in the Leighton Buzzard Circuit. He came to Kilburn nearly forty years ago, and was at once employed by the Gas Light and Coke Company, Kensal Green. For many years he has superintended an important department, and is a highly valued servant. For upwards of twenty-five years he has shown marked interest in our Kilburn Lane Sunday School as its Superintendent. He is an interested and earnest Local preacher, and has been Circuit Steward for thirteen years. He bears an unblemished reputation, has a kind heart, is a generous supporter of all the branches of our Church, and is greatly esteemed by all his brethren. He has won his position in the company and his Church in the face of many difficulties. We pray that many years may yet be loaned to him for serving God and his generation by the will of God.

John was born abt 1850 at Leighton Buzzard, Bedfordshire, to parents Thomas and Eliza. Thomas worked the land.

John began work in the Leighton Buzzard area as a farm labourer from an early age. The 1881 census describes him as a gas factory labourer and local Methodist preacher. By 1891 he had become a foreman at the works.

John married Ann Humbles (abt1845-1920) in the summer of 1869 at Leighton Buzzard, Bedfordshire. Census returns identify six of seven children.