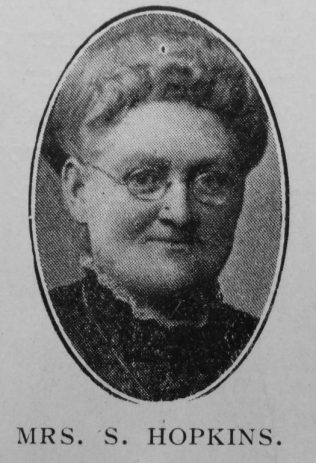 Transcription of obituary published in the Primitive Methodist Magazine by H.W.S.

Windsor Circuit has just suffered a very severe loss by the death of Mrs. S. Hopkins, wife of the sub-postmaster at Charvey Downs. A member of a very old local family, she was born at Winkfield in 1861, and lived in the parish without a break until her death on April 16th.

From her childhood days she was deeply attached to our cause there, and since her teens she has been a most energetic and devoted worker. Her home was ever open to the Minister, and her unfailing kindness will be gratefully remembered by the ministers who have travelled on that Station.

The interment took place at Ascot Burial Ground. Our sister will be greatly missed, not only by her sorrowing family, but by our Church, for such workers can ill be spared from village Methodism.

Ruth was born in 1861 at Winkfield, Berkshire, to parents Frederick Marks, a baker and grocer (1861), and Mary Hannah Osman Matthews.

Ruth died on 16 April 1912 at Chavey Down, Winkfield, Berkshire.