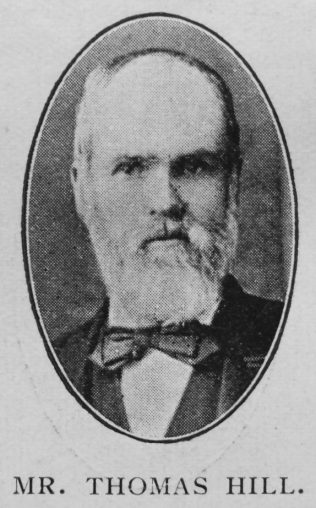 Thomas Hill was a local preacher of forty years’ standing. He was born at Cragg Head, near Durham, of Wesleyan parentage. In his early teens he was converted during an evangelistic mission, and joined the Wesleyan Church. In consequence of some local agitation, both his father and himself were led to resign their membership with the Wesleyan Church, and they immediately united with the Primitive Methodists.

At 18 years of age he became a local preacher, and for forty years rendered steady, faithful and efficient service. He had a good intellect, and was well versed in Methodist theology. His religious experience also was deep, definite, and full. Thus he was well qualified to present the truth with clearness, power, and great acceptance. During a great part of his career he was hampered by ill-health, and consequent straitened circumstances. This again checked his mental development, and reduced a not over-abundant stock of energy. Nevertheless, he steadily and patiently continued his labours.

Throughout his career he bore himself with a modest cheerfulness, and counted it a high privilege to have power and opportunity to serve Christ and His Church in any measure. Now he serves free from the fettering conditions that here hindered the flow of his devotion to his Lord

I have not been able to unambiguously identify Thomas in online records. Can anyone point me in the right direction?