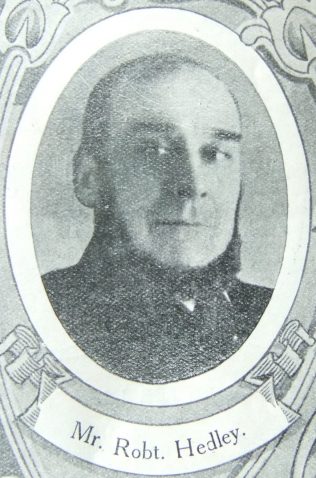 Robert Hedley was born March 18, 1841, at Philadelphia, in Houghton-le-Spring Circuit. From his conversion onwards he has had a strong grip on the essentials of the Christian faith. The Church of his choice has recognised his suitability for positions of honour and usefulness, e.g. 15 years Choirmaster, 10 years Society Steward, 25 years Class leader, and three years Circuit Steward.

This is a record of which any man may be pardonably proud. He is passionately devoted to his Church, and gives unstintedly of his time and means towards its support, nor is he absent from the House of Prayer except through necessity.

The preacher, whoever he may be, is assured of his sympathy and prayers, nor is he chary of a word of praise! The ministers for many years have shared the hospitality of his home.

To know our brother is to respect and love him! May his last years take rank amongst his brightest and best.

Robert was born in 1841 to parents Thomas and Maria. Thomas was a blacksmith.

Robert was a coal miner.

Robert died in the summer of 1914 at Newbottle, Houghton-le-Spring, Co Durham.