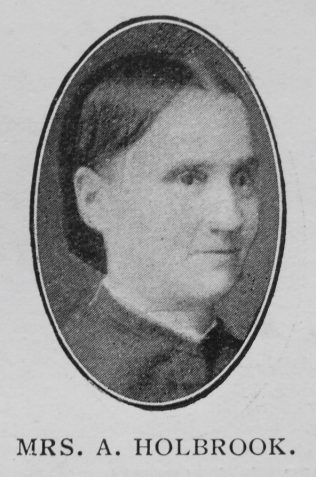 Transcription of obituary published in the Primitive Methodist Magazine by F.L.C.

On April 22nd, 1911, at the ripe age of eighty years, there passed away to the Homeland the spirit of Mrs. Ann Holbrook of the Prees Green Circuit. For nearly sixty years she was a true and devoted member of the Primitive Methodist Church. Her first connection with our Church was at Shrewsbury, from which Circuit she was transferred to Hadnall. For many years, in this latter sphere she rendered good service for her Church and Lord. Her last five years were spent at Butler’s Bank, in the Prees Green Circuit, where in patience and hope she awaited the coming of her Lord.

Her Christian experience was vital and deep, and while health permitted, her greatest delight was found in attending the means of grace. She will be remembered as a woman of rare zeal and prayer. The coming of the end was no surprise to this gracious soul, for she was ready with her lamp trimmed and burning.

The funeral took place at Koddington on April 26th, and on July 2nd a memorial service was conducted in the church at Butler’s Bank by Mr. R. Griffiths.

Long may the sweet memory of our departed friend live to inspire with zeal and hope those whom she has left behind!

“Servant of God, well done!
Rest from thy loved employ!
The battle fought, the victory won,
Enter thy Master’s joy.”

Ann was born abt1831 at Upton Magna, Shropshire.

Ann died on 22 April 1911 in the Atcham Registration District, Shropshire.