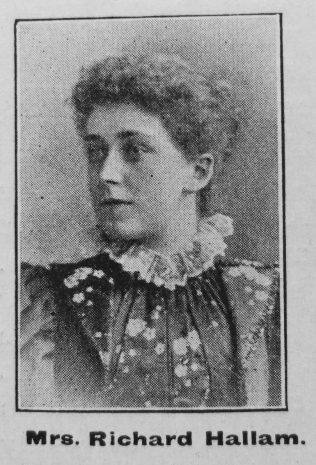 Transcription of Obituary in the Primitive Methodist Magazine by John Hodges

When on the 12th of August, 1902, God called Mrs. Richard Hallam to her higher reward, a dark shadow passed over our Claremont Street Church, Leicester First Circuit. A daughter of Mr. Councillor Hilton, reared in a Christian home, and ever surrounded by spiritual influence, from her infancy she had been associated with the Sunday School and Church. In her early youth she found the peace that passeth understanding, and from thenceforth to her death took a very deep interest in all things that pertained to the prosperity of the work in this corner of God’s Kingdom. For many years, both before and after her marriage, she was a teacher in the Sunday School, an ardent Christian Endeavourer since the commencement of the Society, a member and diligent worker of the Ladies’ Sewing Teas, and Bazaar Committee, and served to the best, of her capacity in other departments of Christian service. The life of the Church was bound up with her own, and being always bright, cheerful and active, now she is gone from us her presence and service will be much missed. As we stood around her open grave we felt – for she was only twenty-six years of age – that in her coffin there was buried hopes and withered promises of a beautiful and noble life. She had bidden fair to become more useful in Christ’s service. She was highly esteemed much respected and beloved, and widespread sympathy is felt for her sorrowing husband – who is a local preacher, Sunday School superintendent, and class leader – her two children, Mr. and Mrs. Councillor Hllton and family, who mourn her loss. She was an affectionate daughter, a loving and faithful wife and a most devoted mother. Her home was, by the perfect love and happiness in it, a foretaste of our Father’s Home above. For some weeks she had been in indifferent health, but thought it was only a passing weakness, and no one suspected that anything of a serious nature would arise. Only two days before her death inflammation and pleurisy set in, and though loving hearts and hands, thought, money, and medical skill rendered what was possible, she rapidly passed away. The time in the valley was short, and there was no darkness, no fear, and the end was peace. The funeral took place on Saturday, August 16th. Crowds of people lined the streets, a weeping throng filled the Chapel, and more than two thousand people assembled in the Belgrave Cemetery where her remains are laid to rest. Very many beautiful wreaths covered the coffin, amongst them being those sent by the Sunday School, Christian Endeavour, and Cycle Club. The Service in the chapel was conducted by the Revs. G. Windram, W.S. Bosence, and. J. Hodges. The members of the Choir, Christian Endeavour, and Sunday School teachers formed part of the solemn cortège from the Chapel to the cemetery. While the sun shone, the birds sang, and heaven seemed to smile because another of God’s chosen ones was safely gathered home. The service at the grave side was conducted by the Rev. G. Windram. The scene was most impressive, and few could restrain their tears as the Choir sang “Sleep thy last sleep.” But we sorrow not as those without hope. She sleeps to wake. Some hours after the funeral was over the writer saw one of the motherless little ones, who did not know she was motherless, come running to her father, and placing her little hand in his, say: “Dadda, is mamma better?” The father replied: “Yes, my dear, mamma is better.” Yes she is better. She is gone where the inhabitants are never sick. Our loss is her gain. Dearly and lovingly as her husband cared for her, willingly and tenderly as loving hands ministered unto her, she is, nevertheless, better with Him who cares for us with more than a father’s care, and loves us with more than a mother’s love. She is gone, but her spirit lingers with us, and her memory inspires us. When the darkness is past and the shadows have fled away we shall meet again in the land whose morning knows no cloud.

Harriet was born to parents Stephen Hilton, a boot manufacturer, and Harriett Gibson

She married Richard Hallam (1871-1957), a boot manufacturer in the spring of 1898 in the Leicester Registration District. Census returns identify two children.