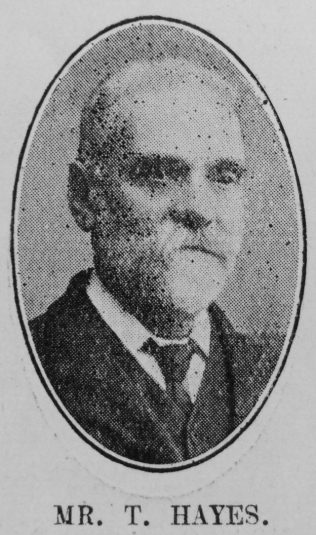 MR. THOMAS HAYES.— Our old church at Beech Lane, in the death of Thomas Hayes, Society steward, sustains a lasting loss. His boyhood and youth were passed under its influence, and after some years in Manchester he returned, and for the last eleven years gave some of the best work of his life to the church. He strengthened the church by a manly, consistent Christian life, carrying also a geniality and good humour which greatly assisted his usefulness. His ready generosity has helped the church through many difficulties, while his hospitality, so ready and free, will be long remembered by those who have partaken of his kindliness.

A sudden breakdown over a year ago, showed the beginning of the end. Repeated attacks upon a weak heart brought the end suddenly in July.

A large number gathered in the chapel to the funeral service on the following Wednesday, when a solemn service was conducted by Rev. E. Bocock and Rev. W. Evans. On Sunday evening, July 25th, a largely-attended funeral service was conducted by Rev. W. Evans, in the Beech Lane Chapel. The preacher gave a tender and powerful discourse. Every heart joined in the prayer that the guidance of God may be given to the widow and the child.

He married Margaret Wood (1879-1958) in the spring of 1906 at Macclesfield, Cheshire. Census returns identify two children.