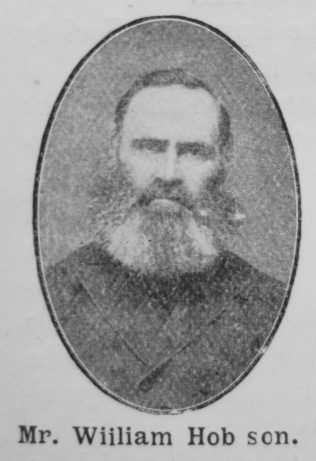 Transcription of Obituary in the Primitive Methodist Magazine by J.P. Osborne

William Hobson, of Langthorne, Bedale Circuit, changed earth’s sufferings for heaven’s rest on September 23rd, 1901, aged 65 years. The interment took place on September 26th in the Crakehall Cemetery, services being previously held in our chapels at Langthorne and Crakehall. For nearly fifty years he was a much esteemed member of our Church, and a local preacher for more than forty-five years. For many years he filled all the offices of his circuit with efficiency, tact, and faithfulness. He more than once represented his circuit in district meeting and his district in Conference. He was also a member of his District Committee. As a local preacher his services were in much request, both on his own circuit as also the Thirsk, Ripon, Middleham, Richmond, and other stations. In all his work he was whole-hearted, devoted, and faithful. His piety was deep and transparent. Nothing gave him more joy than leading sinners to Christ. Time, labour, and support were given to the Church without stint. All his efforts, and pre-eminently his hospitality were shared by his devoted wife and family, who now mourn his loss. From the days of his youth his home was a home for ministers and local preachers. His father, John Hobson, being a man of sterling piety and an eminently gifted local preacher, was known in many parts of the Connexion. Thus our brother was brought up under the most saintly influences. His affliction was protracted and painful, but it was borne with Christian patience and resignation. His end was triumphant and peaceful. During his affliction he was much cheered and comforted by the many expressions of sympathy he received, both public and private, including his District Committee and Circuit Quarterly Meeting. The Rev. J. Hallam, writing the family, says:- “He stands out as such a devoted worker for our church, such a good man, and so friendly in his bearing to his friends, and especially to those of his own Church, that we seem to miss him greatly, and shall do for some time at our Connexional gatherings; his tall figure and gentle face drew so many to him.” The Rev. P. Nume says, “I have known him many years as a good man, a faithful follower of Christ, and a loyal son of our Church.” The Rev. J.C. Livesey writes, “Primitive Methodism has lost one of its noblest and best men by his death.” For nearly twenty-five years the writer enjoyed the closest friendship of the deceased, and feels a greater loss than he can express. While earth is poorer, heaven is richer. His influence and memory will be fragrant to all till we and his loved ones meet him where “the day breaks and the shadows flee away.”

William was baptised on 26 December 1835 at Bedale, Yorkshire. His parents were John, a farmer, and Isabella.