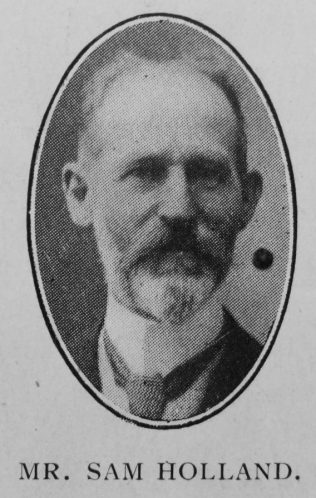 Mr. Sam Holland has left behind him a memory that is fragrant. His genial good humour and affability, his inborn kindness and courtesy, made him a welcome companion and friend. His religion was real and manifest in all his deportment, and kept him bright and cheerful when he had much to depress him. The test of it came with his painful and protracted illness. But his faith in God never faltered. Those who ministered unto him marvelled at his patience. He had just entered upon his fifty-eighth year.

Born of Primitive Methodist parents at Donnington, Lincolnshire, his nature opened to the saving influences around him. Everything connected with church life absorbed him. Since his marriage he has resided at Derby, Lydd, Sheffield, and during the last twenty years at St. Helens, where he has rendered fine service to Westfield Street Church. Always punctual and always reliable, he will be specially remembered for his urbanity and devotion to the post of sidesman.

He passed to his rest March 24th, 1912, and on the following Sunday a memorial service was held.