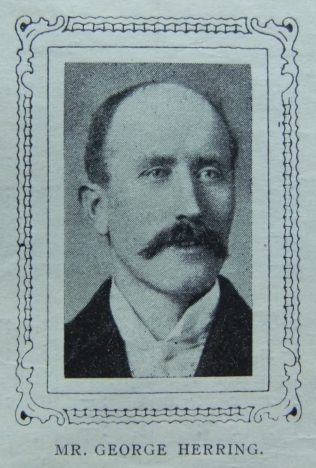 OUR esteemed Brother is an ideal church officer. He possesses the business instinct in no small degree, and this is combined with a very beautiful spiritual life, the one gracefully harmonizing with the other. To see him standing at the portals watching for strangers and seeing one, courteously conducting him to a pew; or seeing with what assiduity he looks after the various functions and services, nothing being missed; or knowing the care with which he interests himself in the finances of his department, and everywhere and at all times with a bright, sunny face and a pleasant word, makes one proud to call him one’s own. But more than Society steward he is an efficient Class leader and a most acceptable local preacher. He is one of the officers, who are becoming fewer and rarer, who know how to pray and who with sweetness and light can lead a seeking soul into the assurance of faith. Our Brother is an asset to his church of incalculable value. He is an East Anglian – how many wise men have come from the East – being born in the village of Bradfield near Weybridge, Suffolk. He graduated through the Sunday school. Removing to Northwood he was converted in what is now the Assembly Hall in 1898, and soon became assistant Society steward, afterwards senior steward. In 1903 he preached with success his trial sermon for the plan. For several years he has led a flourishing class. His is always a welcome presence and if through any cause he is absent from his post it is as if a familiar star had disappeared from vision. Scores have thanked God for his inspiring influence and useful life. He is blest with a quiet, gentle, sympathetic wife.

George was baptised at Bradfield, Suffolk on 4 December 1864. His parents were William, who worked the land, and Hannah.

George was a domestic gardener.

George died in the summer of 1943 at Northwood, Middlesex.