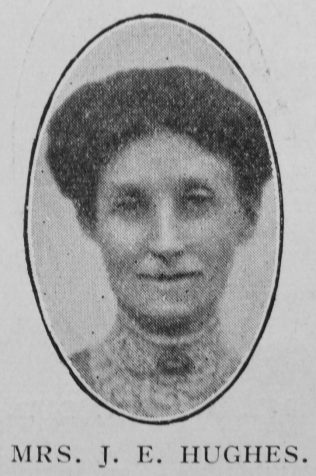 Transcription of obituary published in the Primitive Methodist Magazine by E.M.

Mrs. Hughes, wife of Rev. J.E. Hughes, passed away on March 16th, aged fifty-three. She was the daughter of Mr. and Mrs. W. Hacking, of our Saul Street Church, Preston, and was brought up in an atmosphere of piety. She became a scholar, teacher and member of the choir. She married Rev. J. E. Hughes in 1881, and for over thirty years shared the joys and sorrows, the trials and the triumphs of a minister’s life.

Her sphere was the home, at the means of grace, and in the quiet ministries of charity. She buckled on the armour of her husband as he went out to fight the Lord’s battles. She was content to share his victories. She took a part in all efforts such as bazaars to reduce debts and extend the work of God. In some cases, overcoming a natural timidity, and a not over strong frame, she engaged in other work. When at Worcester she took charge of a children’s service in the school on Sunday evenings, which resulted in the gathering in of hundreds of neglected children, and bore gracious fruit long afterwards. While at Southport she had charge of a women’s Bible class of over a hundred, and took part in a revival which resulted in over three hundred being gathered into the fold. Her help and ministry to the sick were a constant benediction.

It was a sad blow when her husband’s health broke down, and he was compelled to superannuate two years ago. She bore her affliction with heroic fortitude; her end was calm. Leaning on the arm of her husband her spirit passed to eternal rest. She was interred in Ainsdale Cemetery, the funeral service being conducted by Rev. J.T. Barkby and other ministers.

Ellen was born in 1859 at Preston, Lancashire, to parents William Hacking, a grocer’s porter (1861), and Ellen Patten.

She married John Edward Hughes (1854-1924), a PM minister, in the summer of 1881 at Preston, Lancashire. Census returns identify one daughter.