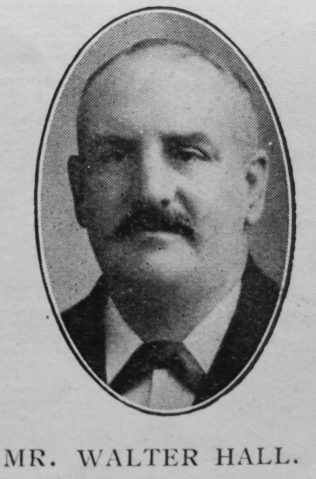 Transcription of obituary published in the Primitive Methodist Magazine by W.A.

Mr. Walter Hall, Ryhill, Barnsley Second Circuit, passed away on July 23rd, 1910, at the age of 49. Our brother was born at Thringstone, Leicestershire. The Primitive Methodist training he received there has resulted in a life of rare usefulness. He was converted in his home church. Twenty-nine years ago he removed to Barnsley. His ability to undertake public work was soon recognised, and he became an acceptable local preacher. For twenty-three years he served in this capacity. His fine presence, powerful voice, his gift of sacred song, his robust thought won him a hearty welcome wherever he went. He revelled in open-air services, and camp meetings were his delight.

Five years ago he suffered a serious accident, which injured his head. His condition was most critical for a long time, but happily, he recovered. He was unable, however, to engage further in public work. He was a patient sufferer, and bore the affliction with manly fortitude.

Mr. Hall was a Trustee for our splendid property at Ryhill. He also held the offices of Trust Secretary, Assistant Secretary, and Assistant Class Leader. For many years he was engaged in Sunday School and Temperance work. He was a loyal Primitive Methodist, faithful in the discharge of his duties, and constant in his attendance at the services of the Church.

A sudden seizure prostrated him on Sunday, July 17th. Despite all loving attention serious symptoms developed, and he passed to his eternal reward on the following Saturday.

The funeral took place on Tuesday, July 26th. A service was held in the church, and continued in Ryhill Cemetery, conducted by Revs. M. Robinson and Wm. Atkinson.

His widow and family, five sons and three daughters, are left to mourn the loss of a Christian husband and father.

Walter was born in 1861 at Thringstone, Leicestershire, to parents Walter Hall, a coal miner (1861), and Eliza Smith.

Walter was a coal miner.