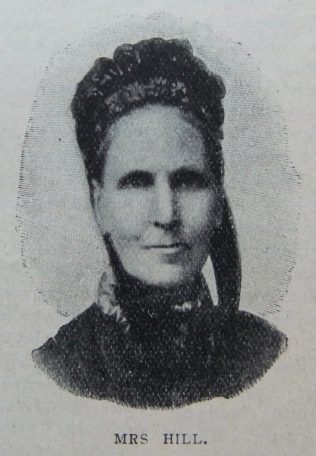 Women have played no small or unimportant part in the history of Christianity. Ever since they gathered round the Christ and ministered to His needs, or suffered as they watched Him on the cross, whilst the other disciples all forsook Him and fled, they have played a very conspicuous part in the growth and extension of the kingdom of our Lord and Master. They early visited the sepulchre where He had been laid and were the first witnesses of the fact of His resurrection. They gathered with the other disciples in the upper room and shared in the endowment of power that came to the early Church. They formed the first European congregation of Christian worshippers and one of their  number became the first European convert to Christianity. They helped St. Paul in his great missionary work, and like Phebe of Cenchrea succoured many of the toilers for Christ in times of difficulty and struggle. What the church would have been without its saintly womanhood none can tell. But all along the line such pious souls have rendered untold service to the cause of Jesus Christ.

Primitive Methodism in East Anglia has been no exception to this general rule of the Christian church. The women of its towns and villages have readily responded to the call of Christ and earnestly helped to establish His cause in their midst. They have become the earnest workers in church and school. They have fulfilled the kindly ministries of visitation and comfort. They have been amongst the most efficient class-leaders, and some have been outstanding preachers of the Word, but not least they have “entertained strangers” in their homes, and made wide circuit evangelism possible in their counties.

This is not to be wondered at. In no small degree womanhood has always and everywhere benefitted by the Gospel of Christ. It has changed their position, raised their status in home and society, thrown round them a halo of tender sympathy and screened them from the rough and violent as nothing else has done. Womanhood in East Anglia amongst a rough, ungodly, depressed and sullen peasantry was not in the most enviable position. Theirs was a life of hardship and suffering. The wages of their husbands were poor indeed, the homes were hardly worthy of the name. There was nothing to break the monotony of incessant toil, and life for them at home or in the fields was a life of weary drudgery. The “cottage homes” of England have sounded well in national poetry, but they have frequently been very depressing and gloomy unless touched by religion and enriched with the presence of God. Then many of them have been finely transformed. The outer walls and brick floors and scanty furniture remained, but a fine “religious emotion” as Dr. Jessopp says, has made the home strangely different from what it was before.

Nowhere more than in the homes of East Anglia has Primitive Methodism made its influence felt. When its evangelists visited those rural districts, Sunday was the day for recreation or sport – gardening in the morning, fighting or drinking in the afternoon: the women folk were expected to give up the morning at least to cookery. It was their only day at home in many cases. But with the advent of the missionary a new ideal was set up. The Sunday cookery was absolutely abolished, Sunday labour entirely tabooed, except the feeding of stock, and the Sunday school became a very popular institution. The Sabbath morning rang with a new song:
“When the morning light drives away the night
To the Sunday school I’ll go.”
The Sabbath became the day of rest and worship, of sacred song and holy joy. It was a delightful transformation, a wondrous change.

The women of East Anglia were amongst the first to respond to the appeals of the early evangelist, and though sometimes it meant persecution at home as well as abroad they nobly took up the cross and followed Jesus. Like Lydia, they not only opened their hearts to receive the truth, but they opened their homes for the messengers of the Cross and made the Eastern Counties famous for generous hospitality. Without a reference to that hospitality no sketch of Primitive Methodism in East Anglia would be accurate. What those “Mothers in Israel” did or how they managed is a puzzle to us modern folk. Like the widow of Zarephath, their barrel of meal and cruse of oil seemed not to exhaust itself, but to be strangely replenished day by day—one wonders how and where from. The little cottage with scanty income which for thirty or forty years has provided bed and breakfast, dinner or tea, weekday or Sabbath for the “workmen of God” cannot be forgotten, and there are many such in England.

“Mother,” said a precocious little fellow, “Where did you stand when you shot the plums into this cake?” for they were few and far between, and the mother quickly replied: “I stood behind your father’s ten shillings per week, my boy.” But the cake was there. Into these homes the missionary of the Cross was always welcome.

But it was not only in the homes that these saintly souls “succoured many,” but in the service without as well as within; in open air, or lowly cottage, or village chapel. When men quailed before the scorn and derision of others these godly women held their own.

In the little village of Whenburgh, when Robert Key visited the village and rough men sought to silence his voice, a band of godly women gathered round him and his wife who accompanied him. They formed a ring with clasped hands and sang:
“Wicked men I’m not to fear,
Though they persecute me here.”
It was a body-guard through which no rough could break, a body-guard of gentle women strengthened by an invisible presence.

On Yarmouth Quay our early missionaries held their open-air services. They were the heroic days when Primitive Methodism lived in the open air. But the authorities determined to put a stop to the irregular proceedings, and issued an order forbidding any further services on the quay. But old Robert Russell carried his high-backed chair for the preacher to stand on as usual, and George Winkfield, John Chambers, George Bell, Robert Todd, John Bitton, and others gathered to conduct the service. The first hymn went all right, but then the police appeared on the scene and ordered the service to stop. But not so – on went the service. More police arrived, and John Chambers and four or five others were hurried off to gaol. Others took up the strain until they, too, were hurried off, and no man was left, but the women were there. There was Mrs. Hill, Mrs. Buddery, Mrs. Duffield, Mrs. Bell, and many others – saintly souls as gentle in the home as they were valiant in the field, who, when the men had all been carried off, took up the flag and carried on the service. The day was won. The prosecution in Court signally failed, and the open services have not been interrupted since.

Of Mrs. Buddery and Mrs. Duffield more may yet be said. But Mrs. Hill may well find her place in this connection. She was a fine soul and a splendid specimen of womanhood – tall, well-built, lady-like but strong, vigorous and self-willed. Like many another worker in town and city, she had come from one of the outlying villages, where she had received deep religious impressions, and yielded heart and eye to Jesus. And then, when she came into the town, she hesitated not to join the little church in the hayloft, and take her full share of its toil and labour. Faithful she stood by the infant cause, and devoted strength and energy to its advancement.

She was a notable class leader. How mightily she could pray! It was the secret of her power. In the silence of her little cottage home she would wrestle with God and come forth strong to lead His people to the higher heights of Christian life and experience.

She was not only a class leader, but a very efficient local preacher. What miles she walked to tell the old, old story, to proclaim the Divine Evangel. Away to Caistor and Ormsby and Scratby, and even Martham. They were walking days. The days of athletic women as well as stalwart men. And on village green or in cottage chapel she would plead for Christ as only women can. It was her joy to lead many to Christ.

I have not been able to unambiguously identify Mary Ann in census returns based on the information given in the sketch above. Can anyone point me in the right direction?