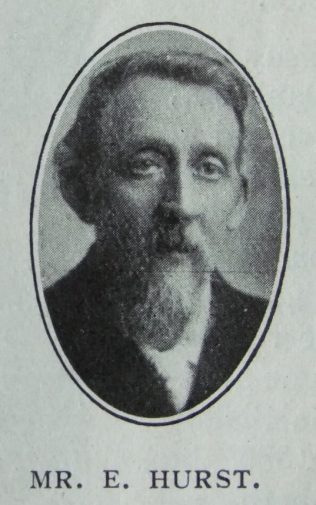 Elijah was born in 1850 at Boundary, nr Cheadle, Staffordshire, to parents Thomas Hurst and Ann Weston. Thomas was a coal miner. Thomas and Ann were members of the United Methodist Free Church.

Elijah began work in the mine when only eight years of age. For many years he worked in the local mines and as he worked long hours, in winter, the only daylight he saw was on a Sunday.

Elijah was brought up in the Church and became a member of the United Methodist Church at Boundary. A class ticket, dated 1870, was endorsed ‘On Trial’.

Opportunities for self-improvement were limited. But Elijah gave himself to mental and spiritual training. At Boundary, Elijah was a class leader and steward.

Elijah became a local preacher in 1872.  He received the following letter.

My dear Bro.,
Our last Preachers’ Quartlerley Meeting resolved that during this present Quarter, you should have several appointments.
Forsbrook, Marth 5th, with Bro. W. Jones.
Fenton Park, March 12th, with Bro. J. Bullock.
Meir Lane, March 26th, with Bro. B. Wood.
You will take the afternoon service unless the Bro. with whom you are appointed should wish you to take the evening service.
Hoping God will greatly bless you and make you wise to win souls.

I remain,
Yours in Christ

The services were evidently considered to be satisfactory, and his prospects hopeful, hence the following letter was received.

My dear Bro.
I write to inform you that you will have to preach your Trial Sermon on Monday Evening, June 17th, at High Street.
Come in the fullness of the Blessing of the Gospel of peace.

The Trial Service must have been successful as he went on ‘Full Plan’ After two years as a local preacher, Elijah began to keep a preaching diary. The first entry was a service at Cheadle PM Chapel in August 1875.

The demand for his services grew, until one year forty-seven Sundays out of fifty-two were occupied in proclaiming the Gospel. In his preaching diary there were 1,286 entries, in addition to week evening services and public meetings. He must have given considerably over two thousand sermons and addresses.

There was a time when at Boundary, the life of the Church was low, and for more than twelve months, Elijah lit up the chapel for class meetings and prayer meetings, though no-one attended but himself. Neighbours saw this, and it so impressed them with the reality of religion, that a revival ensued and many were converted.

The mining industry became less prosperous. Elijah helped a man to do some painting, a trade which he then continued for the reminder of his life. As painter, paperhanger and plumber, Elijah worked for Messrs. Shufflebotham for forty years enjoying the confidence of both the firm and their patrons. As a matter of convenience for business purposes, Elijah moved to Cheadle in 1888. There he joined with the Primitive Methodist Church. He went on the PM plan for the early months of 1889.

Requests for his services were frequent. Elijah preached the School Anniversary Sermons at Stubwood for eight or nine years up until his death. He was no mean, narrow-minded soul, selfish bigot: he had occupied the pulpit in every Nonconformist place of worship for many miles around his home – where there were souls to listen, there, Elijah was willing to tell the truth which informs the mind and awakens the soul.