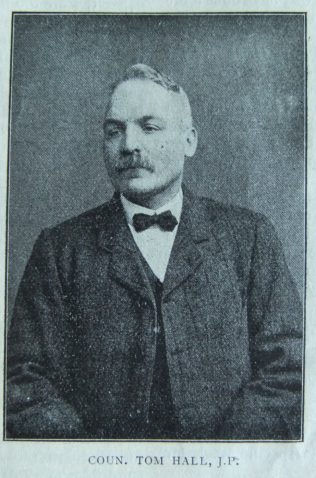 Transcription of ‘Sketch’ In the Christian Messenger by J H Howlett

FOR the first time in its history, Mansfield, one of the rising boroughs of the Midlands, has a Primitive Methodist as Mayor, this honour falling to Councillor Tom Hall, J.P., a member of the Leeming Street Church. By his election, which has the unanimous approval of his fellow citizens,

Mr. Hall has achieved two notable things he is the first working miner Mayor in the country to occupy such a position, and, to use his own words, “my election has broken down the barrier hitherto existing in Mansfield, that wealth is necessary for the occupancy of the mayoral chair.” Being a checkweigher at the neighbouring Pleasley Colliery, Mr. Hall naturally does not possess an over-abundance of this world’s goods, and his election therefore has created a precedent which will place the honour within the reach of several other fellow councillors, who in the past have felt that they could not afford to accept such a distinction, although they worthily deserved it.

A native of the mining village of Coleorton in Leicestershire, where he was born fifty-one years ago, Mr. Hall has led a strenuous life. At a tender age he had to help maintain his home, and his seventh year saw him employed in the fields as a stone picker. Then followed twelve hard months in a brickyard, and this was calculated to fit him for the toil of a colliers life, which he entered upon years before the average school boy now-a-days casts aside his books. Between the ages of nine and thirteen, young Hall was a miner at the Swannington Colliery in his native county, and soon afterwards he came to the Mansfield district, in the public life of which he has played a useful and important part. After seven years at the Pleasley Colliery as an ordinary miner, Mr. Hall was appointed by the men as their checkweigher, and for thirteen years he has occupied this post, and holds it to-day. Sheer grit and a determination to improve himself are responsible for Mr. Hall’s rise from the ranks to the office of chief magistrate of the borough, and his worth as a man of absolute integrity, a man of principle and a man of solid worth is generally recognised in the town.

Many high tributes to the sterling qualities of his character were paid by members of the council on the day of his election, and his speech of thanks showed that he was frankly proud of the dignity conferred upon him. He touched the personal note when he spoke of his wife as “my right hand supporter in everything which tends for the welfare of others, and whatever position I hold I owe it to her assistance, along with my own efforts at self-improvement.” Later he remarked, “Just before she died, my mother said to me, ‘Tom lad, whatever you be always put this before you – try to do to others as you would they should do to you.’ That has been my aim in life. I have never had much schooling, but I have tried to improve myself and to carry out what I considered my duty.”

All his life Mr. Hall has been a staunch Primitive Methodist, as has been his wife, who for many years was associated with the Sunday school. Both are honoured members of the Leeming Street Church at Mansfield, and it was there on Sunday morning, November 12, that the annual civic service was held. A striking evidence of the high esteem in which Mr. Hall is held in the town, was the representative gathering which accompanied him in the mayoral procession to the church, his chaplain ( the Rev. G.E. Rudram, superintendent minister of the Mansfield Circuit) walking by his side, whilst amongst those following him was Mr. W.E. Harvey, M.P. The streets were thronged with people, and the Church was crowded. The service was taken by Rev. G.E. Rudram and the Rev. Harold T. Roe (Shirebrook), the former preaching from Ezekiel xl, 2. The sermon was a plea for righteousness and a deeper reverence for God in civic and national life. A memorable service concluded with the National Anthem, and the Mayor then returned to the Town Hall, where he thanked his chaplain for the sermon, and all who had accompanied him to worship.

One of the first duties which fell to his worship was to preside over a meeting held in the Leeming Street Church, addressed by the President of the Conference (Dr. Dalton). He regarded it as a great honour and told the meeting that in the diary of his year of office which he was keeping he had made the entry, “Chairman of the meeting addressed by the Prime Minister of Primitive Methodism.”

On his part Dr. Dalton said he was proud of the fact that Mansfield had shown the wisdom to do the right thing by placing a man of such high character as Mr. Hall in the mayoral chair.