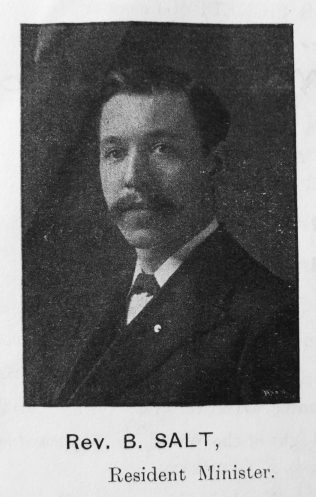 zoom
From brochure relating to Re-opening of Nuneaton PM Chapel in 1907 following installation of a new organ.

BENJAMIN SALT: born at Colne in 1876. He was trained at Hartley College, and entered the Ministry of the Primitive Methodist Church in 1905. His circuit appointments only covered a period of twenty-one years, for the tragedy of the Great War took him out of normal church work in 1914. For five years he had charge of military recreational huts, and served the social and spiritual needs of the soldiers with zeal and devotion. The experiences of this period clouded his spirit and tormented his mind, and for six years he went into retirement. Resuming his active ministry in 1925, he gave renewed proof of exceptional pulpit power, but never completely recovered from the nervous affection that was his legacy from the War. He struggled on gallantly – striving for his own soul and for the souls of others. He was a very gentle, sensitive man, and through the years of his fine Christian witness he suffered much – and he wrought much. The Conference of 1936 accepted his offer of service in the Isles of Scilly, but a few weeks before he should have crossed over from the mainland he crossed another and a darker sea. He died with tragic suddenness on August 25, 1936.

Benjamin was born in 1876 at Colne, Lancashire, to parents John and Elizabeth. John was a stationary engine driver.

Benjamin died on 25 August 1936 in the Kerrier Registration District, Cornwall.