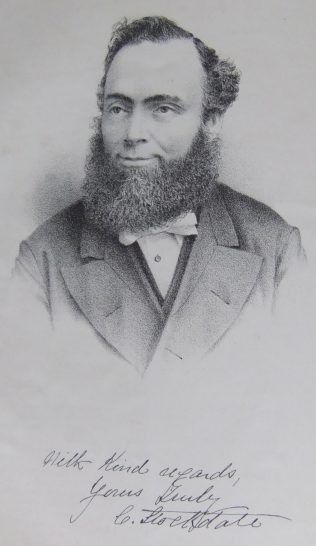 Christopher was born in 1836 at Thirsk, Yorkshire to parents John Stockdale and Ann Ward. He was baptised on 14 September 1836 at Thirsk. John was a cordwainer.

Although his parents were Primitive Methodists, Christopher was brought up by his Wesleyan grand-parents. He attended the Wesleyan Sunday school and was a member of the chapel choir.

Christopher was converted aged 17 and soon became a local preacher. He was appointed as a hired local preacher in his own circuit in 1858.

Christopher’s obituary records that he was a man of indomitable energy and very strong will. He had a passion for his ministerial work. The saving of souls was not a mere sentiment with him, it was a passionate longing.

He lived a very prayerful life, and was in every sense a good man, and a very successful minister. His sermons were above average and always delivered by a man who felt that he had a message from God to deliver to dying men. He was a successful soul winner, hundreds having been brought to God through his instrumentality. In him the sick and poor had a faithful pastor and tender friend.