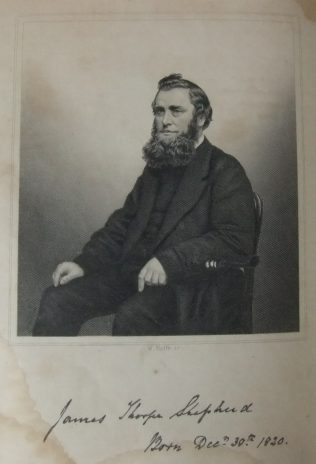 James was born on 30 December 1820 at Amotherby, nr Malton, Yorkshire. He joined the Primitive Methodist Society, which worshiped in his father’s house, at the age of 12. He became a local preacher at the age of 17 and would regularly preach twenty times per quarter. He declined a call to the ministry in 1839 from Swinefleet, but accepted a call from Otley in December 1841.

In his first appointment, James missioned Horsforth, Burley in Wharfedale and Guisley with success in the company of Betty Bell.

His obituary records; ‘He never had any sympathy with brief addresses and short essays, which have to do duty for sermons sometimes now. A forty five minute sermon, crammed with the best thought, and delivered with great earnestness was his idea of preaching.’

James was a very able administrator. His stations have not only had peace, but properity both material and spiritual. The increase on his stations was over 1000.

James was a modest man and, in that modesty, he destroyed nearly every manuscript he had written.

James died on 5 September 1897 at Doncaster.