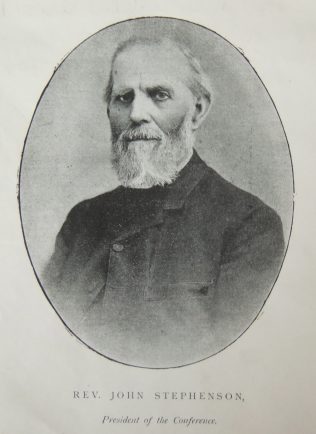 In 1851, John was apprenticed to a shoemaker.

John had his first stirrings of religious consciousness when he was a child aged four or five, but at the time people did not believe in the conversion of little children. As a consequence, John lost his religion. He grew up a mischievous, frolicsome youth and was unrivalled in several sports.

John was converted aged 17. Two years later he was a local preacher.

John’s first circuit was Market Rasen where he had mixed success. Lacking self-confidence he frequently ‘failed’ in the town pulpit and the town officials called him a ‘duffer’ and tried to persuade the Quarterly meeting to send him home. He was better received in the villages and the rural voice prevailed in the meeting.

As a preacher he developed to become clear and convincing, earnest and always practical. His sermons gripped the conscience and stirred the soul. He often gave more truth than comfort. His attacks upon sin in all its forms were so fearless and scathing there was never any need to wish him to be more emphatic.

John was President of Conference in 1893.

John was also president of the Association for the Promotion of Scriptural Holiness from its origin. He was an Editor of ‘The Kings Highway’.