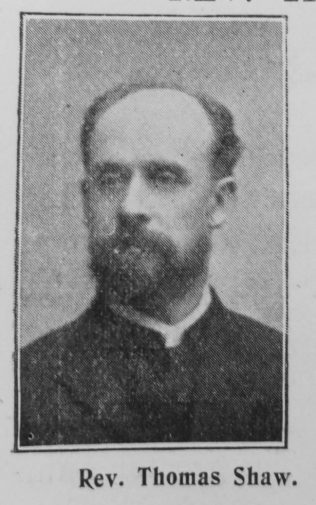 Transcription of Obituary In the Primitive Methodist Magazine by Geo. W. King

After a serious and prolonged illness the Rev. T. Shaw, on Thursday, March 13th 1902, put off this mortal body. He was born at Elland, Yorkshire, April 16th,1855, so that he was in the prime of life when called to higher and fuller service. At the age of 15 he gave himself away to God, hence more than 30 years of his earthly career were in use for “Christ and the Church” As teacher of the young men’s class and local preacher, he gave abundant evidence of fitness for the wider sphere of the ministry. That the call of the Church to a wider sphere was the call of God has been amply demonstrated during the last twenty-three years. His first circuit was Silsden, from which he removed in 1881 to Bingley, and the following year to the Middleham Circuit. On the completion of his probationary term he took charge of the Grassington Circuit, where he remained two years. He then removed to the Otley Station, thence to Idle and Calverley. In 1891 he returned to Silsden for a further term of four years. His next and last station was Colne. Here he spent nearly seven years. Thus it will be seen that the whole of his ministry was spent in his native district, and within twenty miles of his native town. Mr. Shaw was a man strong and true, brave and good. In him there was a beautiful blending of geniality, earnestness, and strength of mind and will. He trained himself to think: to think himself into, as well as about his subject, and when once convictions were reached he was not easily moved from them. He took time to form his purpose, but having formed it, there was no turning back. Before putting his hand to the plough, he took care it was a good one, but when once the hand was placed on it, it was kept there the live-long day, through wind and dust and rain. He couldn’t do otherwise than reason himself into his theme, and, having, done that, it mattered not who criticised or objected. He was a man of robust thought; of more than average brainpower and mental capacity. And his heart was warm; blending with sturdy thought, there was warmth and intensity. Men who have fought their way to their convictions may be forgiven if they express themselves with distinctive earnestness and emphasis. Those who knew Mr, Shaw knew that his soul was hot within him for the things he had seen and felt. His sermons were always thoughtful and stimulating, showing careful preparation both of himself and them. Into his preparation and his preaching he put his whole soul, and no sacrifice of rest or sleep was to him too great a price to pay if he could secure for the Gospel of the Grace of God acceptance and appreciation. Moreover he was the most genial and brotherly of men. He could crack a joke, and he could take one. The social circle was never irksome to him, and he was never burdensome to it. The company of his brethren in the ministry he sought, and always enjoyed. The laymen in every circuit in which he laboured will tell you of long walks, and how short the miles seemed when he was with them. He was always good company, never gloomy, never morose, always bright and cheerful. He was never despondent. He was the most hopeful of men. He recognised that the best was not in the past, but in the future; it was always better on before. And his was contageous hopefulness. He had the power to wake up a man, and make him feel that life was worth living. Faith in God to him meant being joyous and hopeful. With a beautiful blending of these things, no wonder that his ministry was successful. He left his circuits always stronger and better than he found them. He never reported a decrease on any station, and in a few instances the increases were large and substantial. He had the joy of leading a large number of souls into the Kingdom of God. Few ministers of his years conducted more evangelistic services than he. He was the Evangelist in his own circuits, and he did the work well. He was constantly at work of this kind, always eager, always on the alert, always preaching to catch souls for God, and establish the churches. A bountiful harvest of souls has been his. In relation to Colne, the fruits of his ministry were seen in the impression produced on the general life of the town. Says a local correspondent: “The deceased gentleman has thoroughly leavened the life of Colne, with a spirit of true righteousness.” The Rev. H. Cooke, speaking at a memorial service held in the Silsden Chapel, said: “His last seven years had been a splendid term of ministry, and he would be always held in the highest esteem and regard by the people of that station. He had great influence over other Churches in the town, and over the town itself, as well as over their own Churches in the circuit.” As indicating his influence in Colne, it may be mentioned that the vicar, Rev. W. Clifford, the curate, Rev. Mr. Little, and every Nonconformist minister in the town, attended the memorial service in the chapel on the morning of the funeral. The Mayor of Colne was also present at the service. The Vicar called every week during the last few months of Mr. Shaw’s illness, to make enquiries about his condition.

In the Bradford and Halifax district Mr. Shaw was held in the highest esteem, and filled several important offices. Twice he represented the district in the Conference, and in 1900 performed with great ability the duties of General Com. Delegate.

In 1883 he was united in marriage to the daughter of the late Mr. Baron, for many years one of the Connexional auditors, and no man could be happier in the choice of a wife than he. Her ministry contributed in no small measure to make his effective and useful. Her kindness, her charm of manner, made her truly in his home “the lady with the lamp.” Alas, the last words of love between the two on this side of life have been spoken. All too soon, it would seem, has the earthly career of a useful, thoughtful minister of the Gospel terminated. In the prime of life, just when the Church, the home, the wife and four children seemed to need him most, he is called away. “The Lord gave, the Lord hath taken away; blessed be the name of the Lord.” The interment took place at Silsden, March 17th, conducted by the Rev. R. Reeve. The Rev. T. Newell represented the Gen. Com. at the funeral, and upwards of thirty ministers, and a large number of representative laymen from every part of the district were present. On Sunday, March 23rd, the Rev. J. Swales conducted memorial services in the three chapels in Colne circuit.

Thomas was born on 16 April 1855 at Elland, Yorkshire. His parents were John, a cloth fuller, and Emma.

Thomas worked as a cloth piecer (1871) before entering the ministry.

W. Leary, Directory of Primitive Methodist Ministers and their Circuits, 1990

Note: Leary does not appear to give the full extent of his stations.