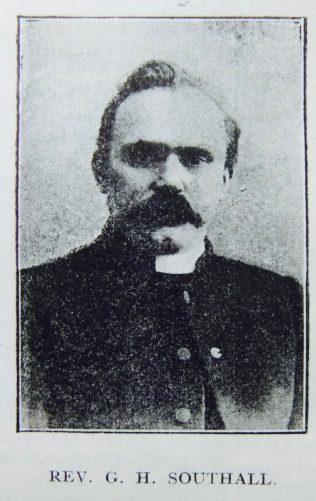 The Rev. Geo. Henry Southall finished his earthly course on the 24th of March, 1930, after a prolonged illness. He was the son of Primitive Methodist parents His father, Mr. Wm. Southall, being actively engaged in the work of our Old Hill Tabernacle, famous for its workers and the many men it has sent into our ministry

Trained in such an atmosphere he was influenced early in life by Jesus Christ, and his Church seeing his gifts and graces soon called him to the work of a lay preacher. After faithful service in his own, Church and Circuit he was called into the wider ministry. This occurred during the superintendency of the late Dr. Ferguson, in the year 1882. He travelled for the long period of forty-five years, and his one regret was that he could not continue in the work he loved. He had a lawyer-like mind; his general business aptitude, and knowledge of Connexional usage caused his services to be sought in District and Connexional courts. In the South Wales District he was District Missionary Secretary for many years, and took a leading place in all District affairs. He served long terms at Swansea, Newport, Pontypool and Aberavon.

He was a leader and carved out his own paths and moulded his Circuits according to his ideals of the Kingdom. He ever commanded the respect of his people, they trusted his judgment and followed him gladly.

His work also on the Lymm and Altrincham, Redditch, Bacup, Bollington and Andover Circuits was rich in fruitage. He was a man of fine powers, and used these powers in the declaration of the Gospel of Jesus and men and women were made to think and led to decision.

He was a keen student. Intellectual vigour, culture and careful preparation were always evident in his sermons. He always dreaded being slip-shod in anything, and every detail of his duties as a Christian Minister was attended to with the utmost care. Those who knew him best loved and respected him most. He superannuated in 1927 and came to live at Lymm with his son. Since that time he suffered much and has not been able to attend the services.

His interest was keen till the last and it was his great joy to talk of the wonder of past service and of the glory of things yet to be. His wife has been a real help-mate in all his work, and in these later days his ministering angel ever at his side with words of hope and acts of love. He leaves four sons who play their part in the spirit of their father.

The funeral service took place at our Lymm Church, and was conducted by the Rev. M.W. Pinker. The Rev. J. E. Woodfield, who represented the General Committee, in a choice address helped us to see the glory of the home-coming and the privilege of service. The interment took place at St. Peters Church, Fughtrington, Lymm. Numerous floral tributes showed the respect in which our brother was held. He has heard the “Well-done” and this crowned the long years of service. We commend to God’s care the widow and family. We shall all meet in the morning.

George was born on 6 January 1859 at Clee Hills, Shropshire, to parents William and Emma. William was a labourer.

George worked as a general labourer before entering the ministry.