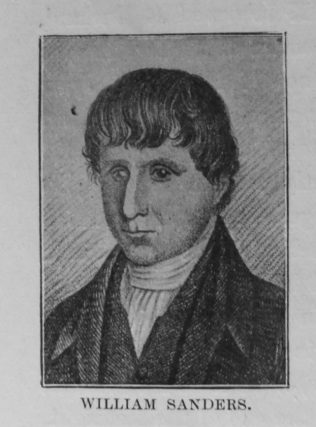 Kendall writes the following regarding William.

‘The first impressions were decidedly disappointing: “From the first look at him you could not well expect either good poetry or ought else worth notice from him. But who may not have felt agreeable surprise to have music soft, smooth and sweet from what appeared a rough, unready instrument? None who had any mind for rhyming could listen long to him without perceiving poetry in his prose.”‘

A transcription of Journal Extracts published in the Primitive Methodist Magazine is attached. Unusually it is presented in the form of a poem.

Barber records that Hugh Bourne wrote some hymns in collaboration with William Sanders, notably, My Soul is now united; and Hark! the Gospel news is sounding.

My soul is now united
To Christ, the living Vine;
His grace I long have slighted,
But now I feel Him mine.

In the open air, they declared their gospel as they marched to the music of:

Hark! the gospel news is sounding :
Christ hath suffered on the tree;
Streams of mercy are abounding ;
Grace for all is rich and free.
Now, poor sinner,
Look to Him who died for thee.