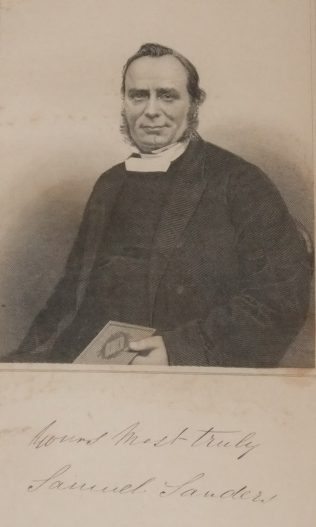 Samuel was born in 1817 at Leek, Staffordshire to parents Samuel and Elizabeth. He was baptised on 24 October 1817 at Leek. His mother was a Wesleyan class leader. Samuel was converted under the preaching of Hugh Bourne and Richard Jukes. Soon after conversion he was sent out to preach by Hugh Bourne.

His obituary records; ‘His ministry was characterised by many excellences; his command of language, and the use of striking and forcible expressions, together with his powerful appeals to the conscience, all united to make him a most acceptable and useful minister of the Gospel.’

His presence was commanding, his voice strong and pleasant, and his whole manner such to encourage the weak, confirm the wavering, and win the offending to Christ.

Samuel was the Travelling Preacher at Tunstall when Hugh Bourne died. He buried Hugh, a task he reagrded as one of the sad privileges and memories of his life.

The sacred office: A charge