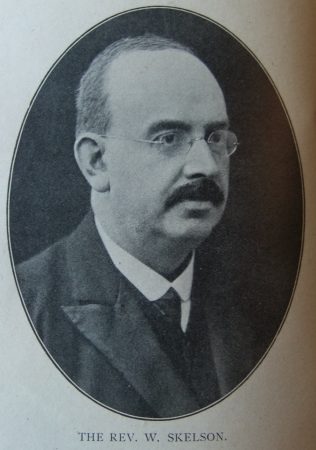 William was born in 1868 at Wymeswold, Leicestershire, to parents John and Christina. John, a grocer’s warehouseman, served the Wesleyan Church in school and choir for nearly fifty years.

William made his decision for Christ at an early age. At fourteen, service began in the Sunday school. His elementary education ended at thirteen, and he passed into town life in Nottingham with membership at Arkwright Street Wesleyan Church. Here open-air speaking and preaching led on to full plan. Foreign service in the Wesleyan ministry was probable, but that door was closed by medical test. Then came an unexpected call. Mayfield Grove Church needed a ‘supply’ and Mr Skelton was appointed. For nine months he served acceptably and then went on to supply at Holywell Cross, Chesterfield. At Chesterfield he found much help and encouragement from Dr George Booth J.P.

He was urged to join the PM ministry and was recommended by the Nottingham IV circuit.

William suffered a breakdown of health at Filey and caused a period of retirement. Strength returned and the Burnley Conference of 1896 gave opportunity for a new beginning.

His obituary records that unassuming and modest, William was a powerful preacher, whose opinions carried conviction because of the sincerity of the experience on which they were based. Many local preachers owed their earliest instruction in the work of preaching to his affectionate and faithful teaching and example.

A search of the Divorce records held in the National Archives reveals that William divorced Clara in 1922. The co-respondent is named as Artno Ezra Grainger.