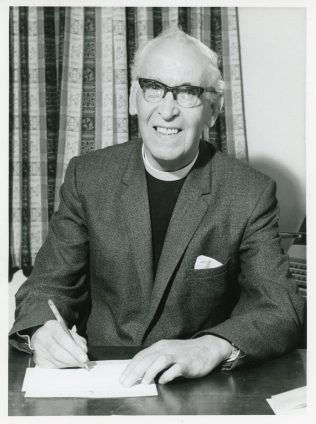 THOMAS SUTCLIFFE: born at Annfield Plain, Co. Durham, on 31st August, 1900, a son of the Rev. J.C. Sutcliffe. As his father was accepted as a married candidate for the Primitive Methodist ministry and appointed to serve his probation in Suffolk, Tom’s earliest memories were of East Anglia, but in speech and sentiment he was of the North-east, where most of his boyhood was spent.

He was just old enough to be called for military service in the First World War, and spent a year in the Army of Occupation. He later entered on a business career in which his native shrewdness and diligence would surely have led to great success; but the call to the ministry would brook no denial, and in 1926 he entered Hartley College.

His probation was served at Swindon, and in 1933 he went to Leeds, a city in which he was to spend thirteen years of his ministry: six years at Belle Vue (1933-39) and two terms in the Richmond Hill Circuit (1939-42 at Garforth and 1947-51 at Crossgates). From 1942 to 1947 he was at Buxton, ministering to great numbers of men and women in the services. In 1951 he began a remarkable ministry at the Poplar Mission, and in 1956 he became superintendent of the Leigh-on-Sea Circuit. From this appointment he was called in 1961 to be Chairman of the Darlington District, a position which he held with grace, distinction and authority until his retirement in 1968. He then returned to Leigh-on- Sea, where he continued to serve without stint up to the last Sunday of his life.

Tom Sutcliffe was a great servant of his Lord, a great lover of his fellows, a great Methodist minister, the kind of man about whom legends gather: in all his circuits they tell stories of the lengths to which he went to bring a sense of the caring love of Christ to men and women. When tragic sorrow beset him, it seemed only to add sureness to his insight and tenderness to his counsel. Few men can have been so greatly beloved, few can so singly have fulfilled their ministry.

He died on 19th April, 1972, in the seventy-second year of his life and the forty-third of his ministry.

Thomas was born on 31 August 1900 at Anfield Plain, Co. Durham, to parents James Corner Sutcliffe, who entered the PM ministry in 1909, and Elizabeth Young.

He married Polly Atkinson (b1904) in the summer of 1933 at Newcastle upon Tyne, Northumberland. Birth records identify two children.