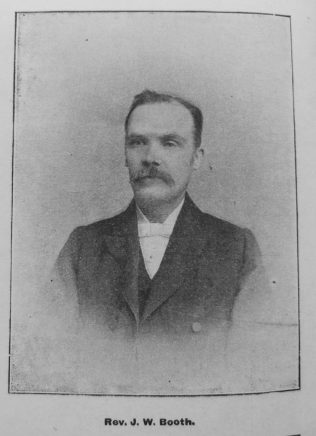 JOHN W. BOOTH: born at Staunton, co. Durham, February 16, 1861. His father was a well-known evangelist in the North of England. The family removed to Edinburgh in I 870, and he was converted when fourteen years of age at the old Victoria Street Chapel. To prepare for the Ministry, he attended Edinburgh University. After a year as lay agent in Petersfield Circuit he was trained at Hartley College. For thirty-eight years he served with care and distinction in town and country circuits. In his work he was greatly beloved. He was a devout student of the Word, and had a clear insight into its teaching. Preaching seemed to fill his life. He took an active part in District affairs, and was successful in the building of several beautiful country chapels. In 1924 he was appointed chaplain to Powick County and City Mental Hospital, where he rendered valuable service for more than seven years, and where his work was highly appreciated. Though of a retiring disposition, he was sympathetic and friendly in spirit, and many were drawn to him. He was diligent and painstaking in the fulfilment of duty; he completed his ministry with success. He passed away suddenly on September 30, 1933.

John was born on 16 February 1861 at Staunton, nr Barnard Castle, Co. Durham to parents William, a fish and egg merchant (1871), and Elizabeth.

The 1881 census describes John as a provision merchant.

John married Sarah Ellen Evans (b abt1875) in the spring of 1897 in the Clun registration district, Shropshire.

John died on 30 September 1933 in the Droitwich registration District, Worcestershire.