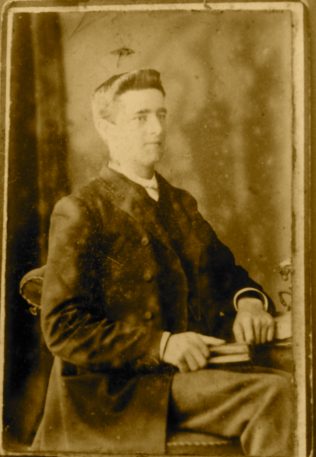 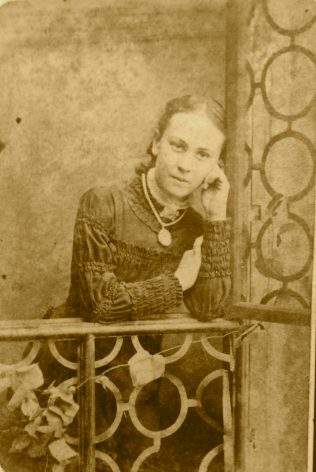 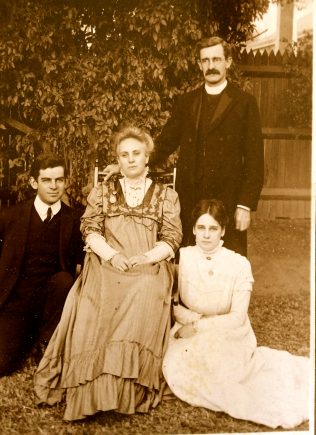 Brian Wibberley Senior, a farmer and corn miller, sometimes described as a ‘provisions dealer’ (who is a kind of grocer,) married Ann Riley, a farmer’s daughter, in 1829. They had six children: John (1850), Henry (1851) William (1856) Joseph (1857) Ann (1861) and finally Brian in 1866. The Wibberleys had been living in Derbyshire since Henry VIII, at least. This family lived in the market place in Ashbourne.

When he was only 11 Brian’s mother died. In that same year, he was ‘born again’ as a Primitive Methodist. Perhaps the death of his mother was a key to his early spiritual awakening. Did she leave some compelling dying words of advice for him? Clearly theirs was a Methodist family, attending the church in Ashbourne.  By the time he was 12 he was teaching in the Sunday School.

Primitive Methodists are our heritage, from both our maternal grandparents: the Wibberleys, the Hunts, the Bests and the Hobbs. They  were a radical offshoot of the Wesleyan Methodists. After John Wesley died, the Wesleyan Methodists tried to become more ‘respectable’. They wanted to appeal more to the middle class. This probably attracted the upwardly mobile Jacksons in Sheffield, Hull, Liverpool and Manchester but others, farmers, labourers, mill workers, were put off and there was a split in the Methodist movement. In particular the Wesleyans didn’t like the open air Methodist ‘Camp meetings’. Methodist preachers who took part in them were chucked out and so they formed their own radical alternative. They do sound a bit like 1652 Quakers with a focus on equality for women and children, glorifying plain speech and plain dress. Like Quakers they were experiential and spoke of the ‘indwelling Christ’. Like many new religions however they became tame and by the time our Brian came into contact with them many of the radical ideas had been toned down. Pity. But still, according to Wikepedia: ‘It was a movement led by the poor and for the poor.’ And it was well within the tradition that he should be promoted so young to preaching positions in the church.

By 1880 Brian, aged 13,  was an accredited local preacher. So when, in 1881, there was a Primitive Methodist preacher listed in the census as ‘visitor’, he wasn’t there to convert our Brian who was already on fire with the Spirit!  Perhaps he was visiting to discuss with Brian and his father his future in the church. Indeed, Brian was ordained as a minister by the time he was 18, in 1885. Considering that he was a miller’s son, a farm boy, he was remarkably well educated with a deep love of literature and music. He speaks of being introduced to the novels of George Eliot at an early age.

The following ten years were very busy. Reverend Brian Wibberley’s first posting was in Collingwood. The following year he was sent to Ballarat. In 1888 he was sent to South Yarra; 1890 Brighton. It was here that he married Maria Ann Hunt, and they had their first child, Grandpa, in 1891. Anne Winifred (Aunty Nance) was born in 1893. While in Brighton the Male Street Methodist Church was built, evidence of the ambitious building projects the Primitive Methodists were completing in Australia. In 1895, after five years in Brighton, he was sent to Maryborough and then in 1897, Lygon Street Forward Mission, Carlton.

‘Mr B WIibberley has a difficult position to fill, coming as he does after such men as Hugh Gilmore and J. D. Thompson. The people who heard him on Easter Sunday are satisfied that he possesses the qualifications necessary for carrying on the work of his gifted predecessors…He is said to be broadly evangelical in theology, and to be a great believer in the power of music in the public worship of God.’

He was at Wellington Square for four years. During those years the Primitive Methodists and the other Methodists joined to become one body. It was to coincide with Australian Federation. The English Methodists would not unify until the 1932 so this was example of Australian forward thinking at this  time.

In 1902 the family was sent to Moonta, a mining town on York Peninsular. He was there for three years and during that time he became the editor of the Australian Christian Commonwealth and wrote his first book: Marks of Methodism. He transformed the mining town, so that ‘even on the foot ball field, instead of the boys giving vent to their feelings by the use of bad language, they would find relief in singing at the top of their voices ‘Lead, Kindly Light’. Perhaps he met the cartoonist, Oswald Pryor, there and became friends. Prior was living in Moonta at this time and attended the Methodist church. When he was farewelled from Moonta in 1905, the Adelaide Observer noted that the ‘crowded state of the hall  testified to the degree of esteem in which the reverend gentleman is held.’ ‘The arrival of the guest was the occasion for prolonged cheering.’. The mayor felt ‘sure he was leaving the district loved by every man, woman and child’.

In 1905 the family returned to Adelaide and he took up work at the Kent Town church. In 1906 he went on a six month trip to the United States and England. I particularly like the report from the Payneham Methodist Church, the Anniversary Public Meeting, reported in the Australian Christian Commonwealth, April 20th 1906. The meeting used the occasion to farewell him. It mentions other family members: Theodore Godlee, as Senior Circuit Steward of the Kent Town Circuit, was in the chair. The financial report was presented by Mr Harris Hobbs. Theodore Godlee’s daughter, Margery, would go on to marry Grandpa and Harris Hobbs was Margery’s uncle. Mrs Wibberley’s ‘delicate state of health’ was noted.

His visit to England included a pilgrimage to his home village of Ashbourne. He wrote about this in an article in The Australian Christian Commonwealth, December, 1906: The Real Dinah Morris. Dinah Morris is a fictional character in George Eliot’s novel, Adam Bede, based on a real woman, George Eliot’s grandmother. Ashbourne appears in the novel under the name ‘Oakbourne’. As a child Brian has fond memories of visitors who had known ‘Dinah’, the Methodist preacher’, who would reminisce about her, comparing the real people with the fictional characters. In his article Brian traces the biography of ‘Dinah’, Elizabeth Tomlinson, using a work, Biographical Sketches of the Lives and Public Ministry of Various Holy Women, by the Reverend Zachariah Taft.  (published in 1825), in which the author ‘fervently defends women preachers’. In 1802 Elizabeth had preached in Ashbourne:

‘The chapel in which she conducted her indoors service is to me a very sacred place…It was the first church in which I consciously worshipped and in connection which which a brother of mine was organist for many years. Here it was that Seth Bede first met Dinah Morris.’

I like the bit where he says: ‘leaving off all superfluities in dress she adopted the Quakeress attire.’ I think it saddened Brian that women preachers had been disallowed by the Methodist Church.

Back in Adelaide, Brian worked at the Kent town Methodist Church, which was renowned for its music; its organ, installed in 1889, was the largest and most modern in South Australia at the time. The church music was directed by Harold Davies and people flocked from all over Adelaide to enjoy the music and listen to Brian Wibberley’s stirring sermons.  A report from the Church Intelligence in April 1908 reads:

‘The Rev Brian Wibberley began a series of addresses to men at the Kent Town Methodist Church on Sunday afternoon. There were two or three hundred men present and the service was of a bright and interesting character. Mr Wibberley delivered an address on ‘Fools and their follies’.  Mr E.A. Hawkes sang ’Be thou faithful unto death’ (Mendlessohn) and the organist was Dr Harold Davies.’

In 1911, Brian graduated with a Bachelor of Music from Adelaide University. The same year grandpa graduated in science. He left Adelaide that year and for the following nine years he was based in Perth, Western Australia.

From as early as 1902 in Moonta and repeatedly, for example,  in WA in 1912, Brian addressed the question of Christianity and Socialism.  While he did not support anarchy, revolution, or attacks on marriage,

‘ the ideal of collectivism, which sought to replace the system of private capital by a system of collective capital, the organisation of national labour on a basis of collective ownership of all production was a different matter. It must be obvious that between Socialism so stated and Christianity there must be some affinity.’

He supported ideals like the Brotherhood of man, opposition to individualism and unfair division of wealth but he worried about the 8 Hour Day movement’s promotion of ‘idleness’ and an emphasis in Socialism on materialism. He was saddened by the divisions which had grown between Socialism and Christianity:

’And yet, let the truth be told- the masses taunted instead of trusted the  modern church; reverence had given place to ridicule.’

‘The gulf between the Churches and the workers was growing deeper, wider, darker, every hour’.

He saw that workers were alienated from the church and the church had failed them and agonised about how to breach this divide.

The Australian Worker gave his 1912 address in Kalgoolie short shrift, writing a critique of his talk under the heading ‘Amazing Ignorance’!

Brian also spoke about the issue of women in the church. In an address to the Wesley Church in Perth in 1912 he starts by quoting Florence Nightingale:

‘Keep clear of jargons about man’s work and women’s work and go your way straight to God’s work, in simplicity and singleness of heart, each to do what each one can do best.’

He then proceeds to outline a comprehensive recount of women in the Bible, Old and New Testament, in the history of Christianity, including the ‘mother of Methodism’, Susan Wesley and lists in detail many modern women missionaries. ‘The historic record melts into prophetic vision.’

When the world went mad during the First World War, I wanted to find evidence that Brian had opposed the war and conscription but no, he held the line of the Methodist Church. ‘The soul of Australia vibrated with the soul of all free people, in indignation of Germany’s betrayal of humanity.’ ‘Our sons had to go and still must go, and go with our blessing’, he said in 1917.

From 1920 to 1924 Brian and Maria were sent east to Malvern in Victoria. In 1924 they returned to Kent Town Methodist church and he became President of the South Australian Conference. In 1929, he retired and continued to live in Adelaide, visited by his grandchildren, Mary, Brian, Judy and David WIbberley  while they were at boarding school in Adelaide. In 1934 he published Music and Religion which he saw as a culmination of his life’s work.

His wife, Maria, who had been an invalid for many years, died in 1935. Judy remembers that she was bed ridden, ‘always in bed’, when the grandchildren visited but she gave them chocolate monkeys and had an amazing shell collection. According to Judy, after Maria died, Brian lived in a bungalow in Tumby Bay next to their family home.

It has been astounding to discover this ancestor and browse over 5,000 entries in the Australian National Library’s TROVE. I can’t say how sad I am that I didn’t know him or talk to mum about  him. This short biography doesn’t do him justice as there is so much more one could say about his many talents and interests.

Please forgive me, great grandfather, for not mentioning everything. I imagine you looking down from heaven and blessing us all anyway, tut tutting about some of our modern sins! We carry you in our genes and in our hearts!